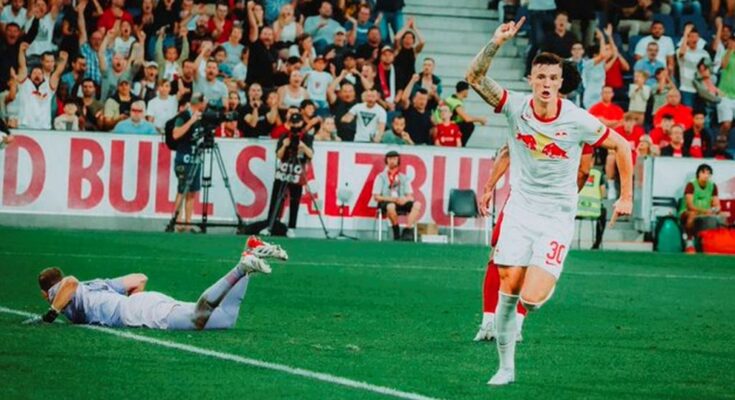 Manchester United fans have been impressed by Red Bull Salzburg striker Benjamin Sesko’s goal against Liverpool in a pre-season friendly on July 27. Many fans even urged the club to sign the Slovenian striker on Twitter.

Sesko, 19, scored an excellent goal to put Salzburg 1-0 up against Liverpool after the 31st minute with a composed strike at the Red Bull Arena. He played a one-two with Noah Okafor before bursting into the box to slot it into the goal past Adrian.

Sesko has been linked with a move to the Red Devils this summer (via Fabrizio Romano). However, it is currently only in the monitoring stage and no progress has been made so far. Newcastle United are also monitoring his situation.

Red Bull Salzburg’s social media team recently reacted to reports linking Sesko to a move to Old Trafford. They hilariously quoted a huge amount of money plus player exchange to sell their forward.

As per the Manchester Evening News, former Benfica striker Darwin Nunez was linked with a move to the Red Devils before he joined Liverpool.

He became the Reds’ club-record signing for a fee of around €100 million, including add-ons. He has shown his class already, scoring four goals against RB Leipzig in a pre-season friendly.

While they missed out on Nunez, Manchester United will do well not to miss out on Benjamin Sesko, who seems to have good potential.

As per transfer expert Fabrizio Romano, Cristiano Ronaldo is intent on leaving the club this summer. Hence, Erik ten Hag is left with Anthony Martial, Marcus Rashford, and Jadon Sancho as his main forwards for the upcoming season.

While the trio have done well this season, scoring 11 goals in four matches, United need top-quality squad depth, which Sesko might be able to provide.

Moreover, if the youngster stays on his path of progress, he might have many more suitors next summer, which would increase his price as well. He is currently valued at €10 million.