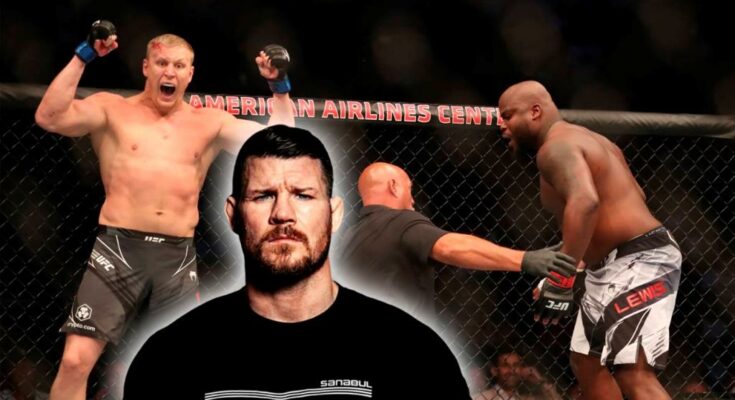 In the early seconds of their UFC 277 main card bout, Sergei Pavlovich (16-1 MMA, 4-1 UFC) stunned Derrick Lewis (26-10 MMA, 17-8 UFC) with a series of punches. He got the stoppage from referee Dan Miragliotta at the 0:55 mark, much to the dismay of Lewis and his home-state fans.

Pavlovich drilled Lewis in the head with a series of stunning punches. Lewis retreated while Pavlovich chased him down and continued his barrage. Miragliotta dove in after a sequence in which Lewis landed face down on the canvas. But immediately after Miragliotta stepped in, Lewis protested.

Fans who felt they were robbed of a chance to see Lewis battle back were not happy. Dana White called it an early stoppage.

However, Michael Bisping thinks the outrage is a bit unjustified. During BT Sports’ UFC 277 Review Show, he said:

“I feel for the guy, but I don’t think it was that controversial … Any time you see a man fall head first to the canvas, right? When you’re the referee, and I understand, he did bounce back up. But when he falls head first to the canvas, your job as a referee is fighter safety. That is paramount above everything else. And we’re not dealing with flyweights or featherweights or bantamweights, we’re dealing with heavyweights.”

“If that man’s unconscious and he gets to eat another full force blow that Sergei can throw as hard as he can, and he’s unconscious and cannot defend it, we can be talking life altering injuries. So at that moment in time, Dan Miragliotta had to make a split second decision. Was it the right one, was it the wrong one? Maybe you can make an argument both ways. But I understand why, because that graphic of falling head first is not a good one. Maybe when his head hit the canvas, that brought him back round and that’s why he jumped back up, you never know.”

Watch Michael Bisping break down the Derrick Lewis vs. Sergei Pavlovich stoppage below: