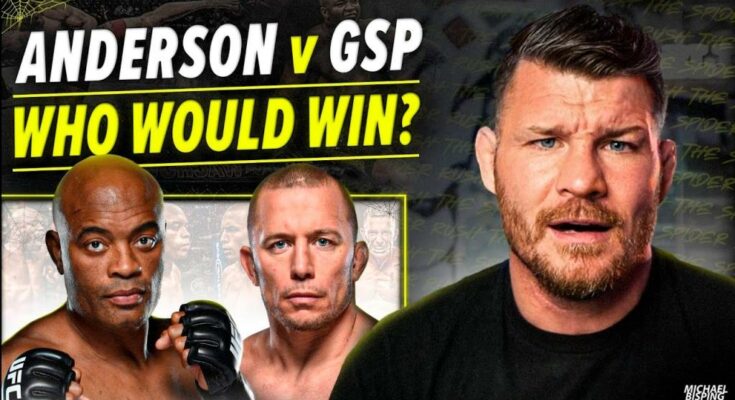 Michael Bisping last fought Kelvin Gastelum in November 2017 and lost via first-round KO. Bisping announced his MMA retirement in 2018 and was inducted into the UFC Hall of Fame in 2019. He currently works as a UFC commentator.

Meanwhile, Anderson Silva’s final UFC fight was a fourth-round TKO loss against Uriah Hall in October 2020. Silva parted ways with the UFC in November 2020 and has been competing in the sport of boxing.

As for Georges St-Pierre, his last MMA fight came against Bisping in November 2017. GSP beat Bisping via third-round submission to win the UFC middleweight title, which he vacated soon after. St-Pierre announced his MMA retirement in 2019. He’s lately found tremendous success as an actor/model and entrepreneur.

Michael Bisping has put forth a breakdown of the fantasy matchup between Anderson Silva and Georges St-Pierre. In a video posted to his YouTube channel, Bisping recalled defeating Silva and losing to St-Pierre.

Bisping noted that Silva and St-Pierre similarly reigned as the UFC middleweight (185-pound) champion and UFC welterweight (170-pound) champion respectively from 2006 to 2013. One ought to note that GSP lost his title in 2007 but reclaimed it in 2008.

Bisping, a former UFC middleweight champion, pointed out that in 2010, ‘The Spider’ teased moving down to welterweight to fight St-Pierre. Bisping believes St-Pierre would’ve comfortably grappled his way to a decision win against a diminished version of Silva if they’d fought at welterweight in 2010.

Bisping then discussed Georges St-Pierre possibly facing the Brazilian MMA great at middleweight between 2015 and 2017. He feels that in the 2015-17 period, St-Pierre – who’d rehabbed old injuries and gained muscle mass during his MMA hiatus since 2013 – would’ve beaten Silva.

Nevertheless, he opined that Silva would’ve beaten St-Pierre in their primes, stating:

“In their primes, from 2009 to ’12, fighting at middleweight, I’ve gotta go with Anderson Silva. Now look, overall, I think it would have been an extremely close fight.”

“Georges would’ve come in for a takedown; he [GSP] would’ve walked into a knee, an elbow, a punch, a kick – something. And I do think Anderson Silva would’ve been victorious. There it is. In their primes, I think Anderson might’ve got the job done.”

Watch Bisping discuss the topic at 13:25 in the video below: