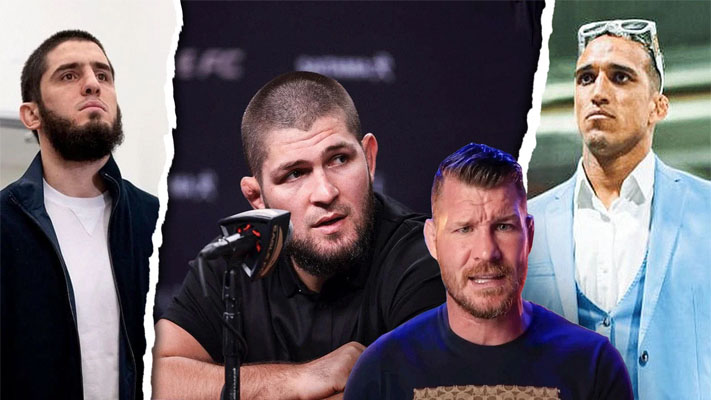 Khabib Nurmagomedov is heavily invested in Charles Oliveira and Islam Makhachev’s upcoming UFC 280 headliner. The former lightweight champion is coaching Makhachev and has not hidden his excitement for the meeting between the two contenders.

Nurmagomedov took to Twitter to make a bold prediction for the big fight. He believes Oliveira will fail to make weight or show up in Abu Dhabi and will be replaced by Beneil Dariush. However, the outcome remains the same for ‘The Eagle’ with Makhachev becoming the new lightweight champion:

“I just think Charles Oliveira will not show up in Abu Dhabi and the UFC will replace Charles with Beneil Dariush. Regardless of who the opponent will be, @MAKHACHEVMMA is on his way to becoming the best in the world #ufc280”

Former UFC middleweight champion Michael Bisping spoke about Nurmagomedov’s comments on his podcast. He pointed out that the Dagestani was in no position to speak:

“I mean look, Khabib’s gonna go out there and defend his boy. Of course. Islam is a protege of his and he’s coaching him and he’s taken him under his wing and he’s mentoring him. And Khabib’s gonna say what Khabib says. However, Khabib’s a legend so that’s why I’m hesitating and he’s potentially the GOAT. Nothing but the highest respect, [but] Khabib did miss weight a few times as well. I mean I love Khabib, I’m not talking s***, I’m a huge fan. But, but, you can’t really say too much.”

Catch Bisping’s full comments on Believe You Me:

Khabib Nurmagomedov’s tweet wasn’t the first time he addressed weight cutting this week. UFC 279’s weight-cutting fiasco revolved around Khamzat Chimaev, who was scheduled to face off against Nate Diaz in the main event.

Chimaev’s failure on the scales forced the UFC to reshuffle three fights on the main card, which resulted in ‘Borz’ facing Kevin Holland at UFC 279. All this took place amidst heightened indifference on the part of Chimaev and a demeanor that refused to take responsibilty, much to the ire of fans.

Khabib Nurmagomedov shared his concerns with the fans as he remarked in a public appearance:

“I followed what was happening with his weight and looked at his team. There are no Muslims around him and this is very bad. Because if you are a Muslim, you need good, strong people around you. You need good people, even if you don’t like it, you need them.”

Chimaev did not take too kindly to the former champion’s advice. He responded by referring to the multiple canceled fights against Tony Ferguson and then later deleted his reply.