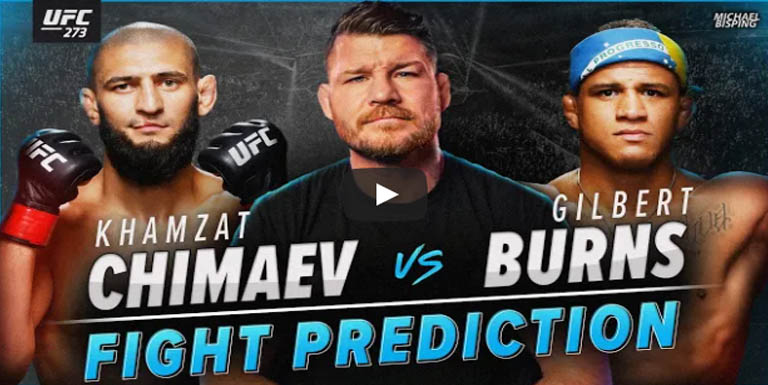 Michael Bisping has backed Khamzat Chimaev to win at UFC 273 against Gilbert Burns. The former UFC middleweight champion has admitted that he is officially on the Chimaev hype train and briefly spoke about the Russian-born Swede’s most recent win over Li Jingliang.

In a recent video uploaded to his official YouTube channel, Michael Bisping claimed that he is leaning towards a victory for Khamzat Chimaev. However, Bisping admitted that he would like to be proved wrong by Burns:

“I’m gonna lean towards Khamzat and I’m sorry Gilbert, I know we’re buddies, I know we’re friends but if you see this, I hope you prove me wrong, because I do, I do apologize. But you could say that I’ve been sold the hype. I’m just telling you, what he did to Li Jingliang just blew my mind, that was so impressive, Jingliang ain’t no slouch… and Khamzat just picked him up and he looked like he could’ve done whatever he wanted to… he was talking to Dana White and stuff like that, and he’s talking about becoming the champion, he’s talking about becoming the champion at 185.”

Watch Michael Bisping’s prediction for the Gilbert Burns vs. Khamzat Chimaev fight below:

During a recent interview with Morning Kombat, ‘Durinho’ claimed that he is looking for a finish against Chimaev:

“Yeah, I get it because Dan Hooker fought, they saw me losing to Dan Hooker few years ago. They saw my fight with Kamaru [Usman] so they think they see the weakness, they see a loss and this guy [Chimaev] they just see like ‘Wow’, Darren Till [saying] this guy is this, you know, [has] all the hype and Dana White [said] he’s a murderer… I’m not looking for [their] respect, I’m looking for a finish… It is what it is.”

Check out the interview below:

Burns and Chimaev will cross paths on April 9 in Jacksonville, Florida. The winner of this bout could go on to fight for the UFC welterweight title in the near future.