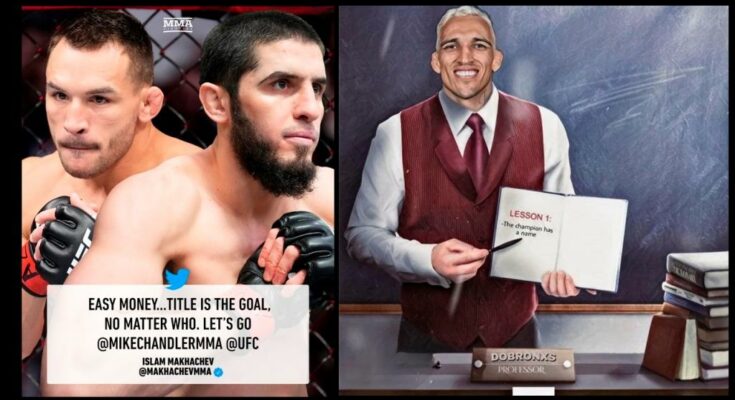 Former UFC lightweight title challenger Michael Chandler addressed his division leader Charles Oliveira, urging him to fight Conor McGregor so that he can fight Islam Makhachev for the vacant belt in the meantime.

Michael Chandler, the current #5 ranked lightweight challenger, most recently featured on the main card of UFC 274 back in May, stopping former interim titleholder, Tony Ferguson with a brutal second round front kick knockout.

Following the victory, Chandler called out the likes of the aforenoted, Oliveira, and Justin Gaethje for championship rematches – as well as offering to fight Conor McGregor at the welterweight limit.

Yet to land his Octagon return, Chandler, a staple of Kill Cliff FC in Deerfield Beach, Florida has now taken matchmaking measures into his own hands, offering to share the Octagon with the aforenoted, Makhachev in a vacant title offing, as Oliveira weighs up a title fight with the soon to return, McGregor next.

“And then whenever you get your so-called ‘superfight’, do your thing, get it out of your system, then you can come back to our division. See you at the top.”

Sharing the Octagon with Sao Paulo native, Oliveira back in May of last year in a vacant title clash, Chandler got off to a great start against the Brazilian scoring a knockdown at the end of the first frame, before he was dropped at the beginning of the second frame, and finished with follow-up strikes.