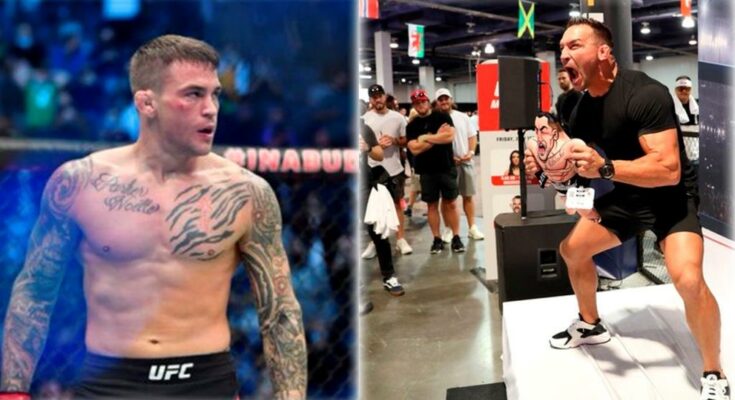 Michael Chandler believes the next time he makes the walk to the Octagon, Dustin Poirier will be staring across him.

Chandler and Poirier have been linked to a fight ever since the former Bellator lightweight champion signed with the UFC. However,Michael Chandler (23-7 MMA, 2-2 UFC) and Dustin Poirier (28-7 MMA, 20-6 UFC) were recently involved in an altercation while in attendance for UFC 276, which got fans salivating at the idea of a potential matchup.

“As of right now, me and Poirier are the only guys that are not matched up inside the top five,” Chandler said backstage at UFC London.

“There’s no secret Dustin Poirier and I have been on a collision course to stepping inside the Octagon. I’m not waiting. I think you’re gonna hear some fight news coming soon and it could be me and Dustin Poirier. We’ll see.”

“I’m not waiting. I think you’re gonna hear some fight news coming soon and it could be me and Dustin Poirier. We’ll see.”

Michael Chandler doesn’t understand where Poirier’s hostility towards him is coming from, but said he isn’t concerned about whether or not he ends up fighting him.

“In his mind, he’s got some ill-will towards me if you will and it’s gonna make it that much easier to knock him out whenever he oversteps if he and I do step inside the octagon, but I have not lost one minute of sleep thinking about Dustin Poirier, and I’m gonna keep on doing what I’m doing until the fight gets announced and then I’m gonna go out there and finish my next opponent and become UFC champion next year.”

With both men known for their fan-friendly style, Chandler expects the potential matchup with Poirier to be a war.

If Michael Chandler vs. Dustin Poirier gets made, it would be a massive fight and a very fun fight for the fans.