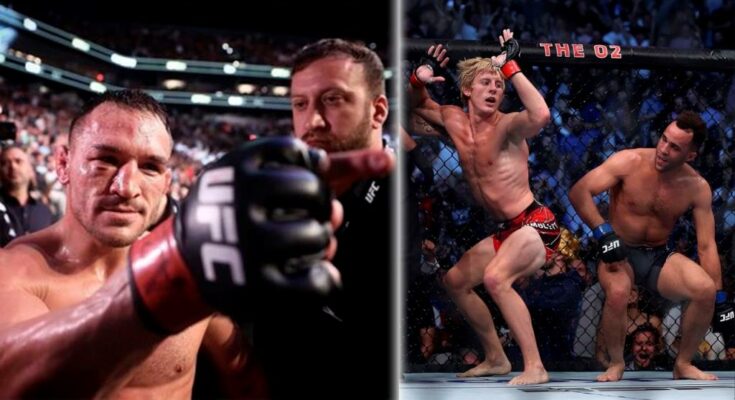 Paddy Pimblett had an outstanding performance at UFC London but it was his post-fight message that has everyone’s attention. Pimblett shared the Octagon with Jordan Leavitt inside the O2 Arena on July 23. Pimblett came across as a total superstar and he gave fans in attendance plenty to cheer for.

Paddy locked in the rear-naked choke in the second round to force the finish and improve his pro MMA record to 19-3.

During his UFC London guest fighter press conference, Michael Chandler explained what makes Pimblett a name to watch in the coming years.

“Paddy and I have been in contact a little bit. He’s a guy who’s in that perfect position where I’m the guy, I’m gonna be the champion here in the next 12 months. He’s going to be nipping at my heels, coming into the Top 15, coming into the Top 10. But I don’t have the scarcity of mindset when it comes to other guys in my division, especially when I see guys who are doing it the right way, in my opinion.

While Paddy Pimblett is beloved in the UK, a portion of the UFC fanbase has been turned off by Pimblett’s brashness and weight ballooning in between fights. While he’s looked impressive so far in the Octagon, some believed he hasn’t faced the high-quality competition necessary for him to have the opportunity to silence his doubters.

Michael Chandler has also turned into a marketable presence in the UFC due to his skills on the microphone and in the Octagon. A 30-fight veteran, Chandler knows potential when he sees it and seems to be giving Pimblett his endorsement amidst some scrutiny from fans.

A matchup between Chandler and Pimblett could potentially happen down the line, but it’s clear that Chandler has a tremendous amount of respect for the streaking British star.