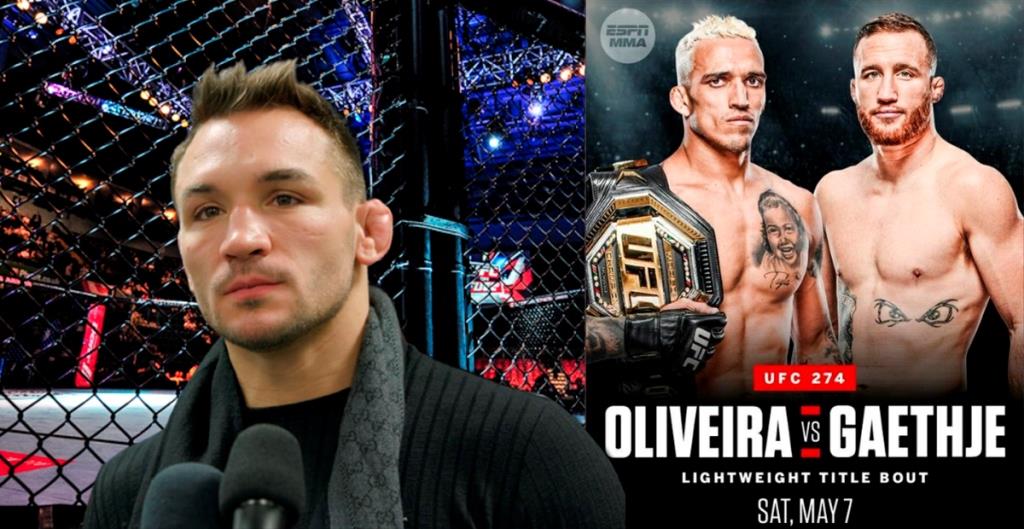 Michael Chandler made his prediction for Oliveira vs. Gaethje. Fans might consider Chandler an expert when it comes to Charles Oliveira vs. Justin Gaethje.

The battle between the lightweight warriors finally has a green light. The UFC title will be on the line, as Oliveira looks to defend his gold once again. It won’t be an easy task as the Brazilian champion takes on the resurging Gaethje.

When it comes to predicting fights, some may consider this one as a toss-up. You have a powerful boxer who’s only been submitted once in his career vs. the best submission specialist ever to grace the Octagon and he’s not a bad striker either.

The bout has a lot of question marks on it. But there is one man, who has spent some time in the cage with both Oliveira & Gaethje. That honor goes to ‘Iron’ Mike. Chandler would give his two cents on the matchup.

“I would not have given Charles Oliveira a chance to beat Justin Gaethje up until about the last 12 months.” Chandler said on ‘DC & RC‘. “Charles Oliveira has come back essentially from the dead and resurrected his career from the dead. He was spotty, up and down, could never be relied upon when it comes to performances.

While Oliveira was far from a title most of his career and had a rocky road, he’d overcome it to become the king of 155. Chandler has surely recognized that part of his story and believes Oliveira’s confidence in himself is skyrocketing.

“Just the way that he is turned into a deadly striker as well as one of the greatest submission artists that, that the sport has ever seen as well as going out there and finishing myself… and Dustin. That kind of stuff comes with a little bit of extra confidence with each time he steps inside of the octagon.”

“I think he’s going to be the most confident Charles Oliveira that we have ever seen. After the year of 2021 that we just saw in him gaining that title and then defending that title.”

Whether or not that self-belief in himself will be enough to vanquish ‘The Highlight’, remains to be seen.

While Chandler may leans toward Oliveira in his words, he doesn’t overlook the madman that is Justin Gaethje.

“Justin Gaethje, as we all know he is a killer,” Chandler continued. “I think it’s gonna be an extremely exciting fight. Still, I think I give the edge to Charles Oliveira. He just has too many tools and we all know how Justin Gaethje can win.

“But Charles Oliveira has also proven a lot of us in a lot of the doubters wrong [that believed] he can’t be in there, in those wars. He’s a lot tougher and a lot more resilient than we thought he was.”

“I’m excited.” Chandler added. “Maybe I’ll be on the card with them. We’ll see.”