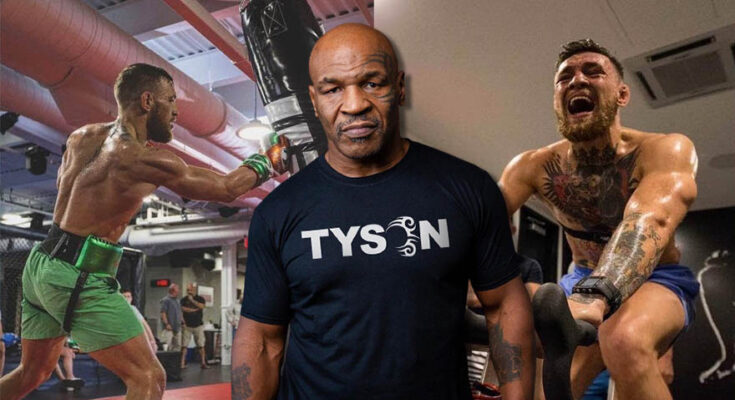 Mike Tyson is no stranger to big fights or the highest level of competition, and he has some advice for Conor McGregor.

The boxing icon Mike Tyson is known for his insatiable desire to learn new things. He began his professional boxing career and quickly rose to the top of the sport. He also pursued a lot of businesses further, and he now broadcasts his own podcast, Hotboxin’ with Mike Tyson.

Per the former boxing heavyweight champion, the Irishman should not target title fights immediately after making his return.

Mike Tyson discussed the matter with former two-division UFC champion Henry Cejudo. ‘Triple C’ asked Tyson about his opinion on the Irishman’s return and whether the former champion should shoot for the top immediately after his absence.

The boxing great agreed to Cejudo’s suggestion that the Irishman shouldn’t aim so high upon his return but take it slow before challenging any champion:

“I believe you should do a couple of fights, get your feet wet… build your confidence up…” said Tyson.

Cejudo named Tony Ferguson as a potential opponent for the Dublin native, but Tyson stated it could be a hard fight for ‘Notorious.’ The boxing great said that even if McGregor wins, he could still be hurt.

‘Triple C’ has lately engaged in banter with McGregor and published the video on his social media by calling it a “freebie” for the Irishman.

Watch Mike Tyson give Conor McGregor advice in the video below:

It would appear McGregor’s training regime is going as planned, judging by a video the MMA superstar recently posted.

While on his yacht in Monaco to witness the Formula One Grand Prix, Conor McGregor showed a pair of gloves and a heavy bag, indicating that he was training even while on the move.

The former two-division UFC champion has been regularly training and even sparring at Crumlin Boxing Club, where he began his combat sports journey. It’s perhaps only a matter of time before the Irishman returns to MMA training.