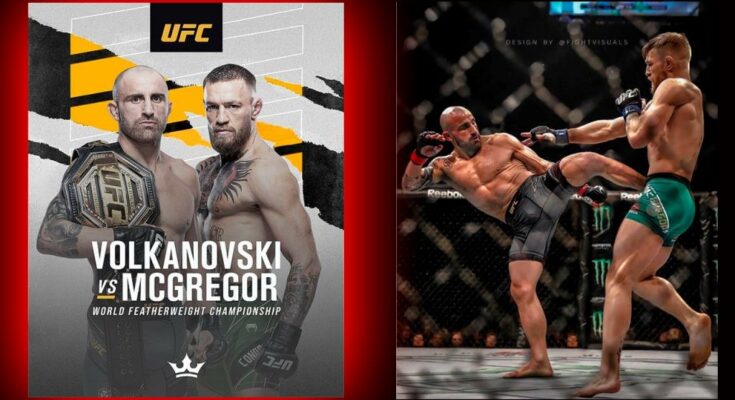 Fans on social media theorized how a featherweight matchup between Alexander Volkanovski and a prime Conor McGregor would unfold.

With Volkanovski cementing his status as an all-time great at featherweight, fans weighed in on the biggest ‘what-if’ in the division. The Instagram page Fight Basics posted a photo depicting a hypothetical matchup between Volkanovski and McGregor. It came with the question, “Who wins in their prime?”

The majority of commenters are of the opinion that McGregor would make quick work of Volkanovski. A user, who goes by the handle @adickson86, wrote:

“[McGregor] flatlines him within 7 seconds to beat his own record for fastest KO in a title fight.”

His sentiments were echoed by @matthew_whitham and @smeshdapizza, who pointed out that Volkanovski got dropped by Max Holloway and Chad Mendes. They believe that McGregor’s power could prove too much for the Australian.

Some believe Volkanovski’s pace could be too overwhelming for ‘The Notorious.’ A commenter who goes by @moartinn_ is confident that Volkanovski “takes [McGregor’s] soul within 3 rounds.”

McGregor’s best days were arguably when he competed at featherweight. Undefeated in the division, the Irishman has notable wins over the likes of Jose Aldo, Dustin Poirier, and Chad Mendes.

However, Volkanovski’s body of work is inarguably superior to McGregor’s short title reign. The Aussie now has four title defenses on his resume and an impressive 3-0 record against former champion Max Holloway.

The Australian considers himself one of the greatest fighters in the UFC featherweight division, although he isn’t ready to rank himself first just yet.

According to Alexander Volkanovski, the distinction of featherweight GOAT (greatest of all time) still belongs to Jose Aldo. The reigning 145-pound champion claimed that Aldo’s long reign, which spanned seven title defenses in the UFC and nine inclusive of the WEC, was nothing short of spectacular.

As for Conor McGregor, the Australian believes his short reign disqualifies him from being talked about alongside other titleholders.

“You need defenses, that’s the thing,” Volkanovski said ahead of UFC 273. “I’m going to give him [McGregor] respect. The dude can fight. He made some bad decisions and all that type of stuff but he can fight. To take out Aldo in Aldo’s prime, that’s saying something as well. Aldo is still showing he’s still in his prime, he doesn’t age.”