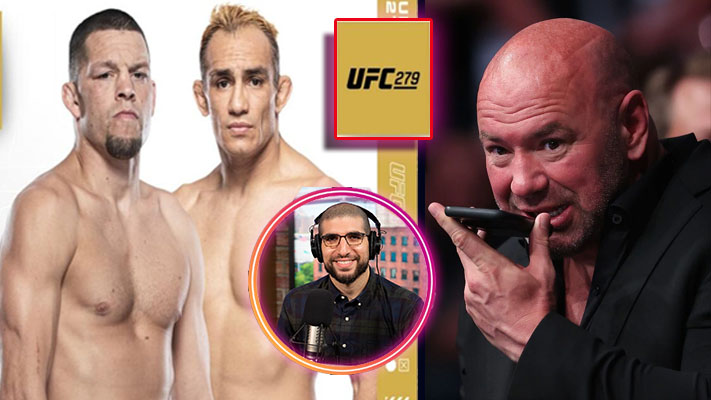 On one of the craziest nights in the history of the promotion, the UFC 279 card completely fell apart after Khamzat Chimaev missed the welterweight mark by 7.5 pounds.

In a move that is being called brilliant by some fans and “scripted” by others, the UFC set up Nate Diaz to fight fellow veteran Tony Ferguson.

The lineup shuffle also saw Chimaev booked against Kevin Holland. The two brawled backstage the day before, which led to the cancelation of the scheduled press conference.

Li Jingliang, who was supposed to face Ferguson, will now lock horns with a 10lbs.-heavier rival in Daniel Rodriguez, who was originally Holland’s opponent.

The MMA community was quick to praise the UFC president for saving the card with the well-thought out swaps. However, veteran MMA journalist Ariel Helwani revealed that it is not Dana White who deserves the credit, but Hunter Campbell.

Hunter Campbell, whose name often comes up in legal matters regarding the UFC, is the promotion’s Chief Business Officer and former Executive Vice President and General Counsel, per his LinkedIn account.

Khamzat Chimaev’s reputation of being a “gangster” has certainly dampened a little after missing weight by a significant margin and showing no remorse for the same.

He issued quite a few threats to Nate Diaz as well as other fighters on the card for some reason in the lead up to UFC 279, but could not show up where it mattered the most.

Diaz did not forget to remind Chimaev who the “Real G” was in his post-weigh-in chat with Joe Rogan. While at it, he also took a sly shot at Khabib Nurmagomedov for ducking Tony Ferguson.

Watch the promo below:

This is the first time in the history of the promotion that a main event had to be changed due to a fighter missing weight. However, Chimaev will not be fined since he is getting ready to face Kevin Holland at a catchweight of 180pounds. The other two fighters on the card that missed weight – Chris Barnett and Hakeem Dawodu – will have to forfeit a percentage of their purses.