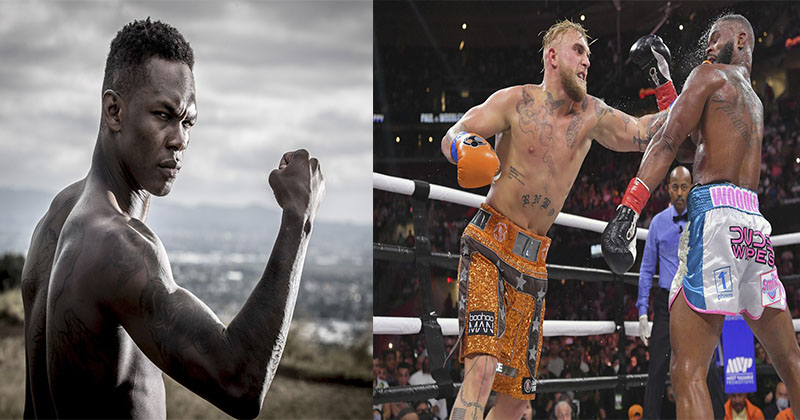 UFC middleweight champion Israel Adesanya shared his impressions of the boxing match between Tyron Woodley and popular video blogger Jake Paul, in which the star youtuber won by a split decision of the judges.

Israel Adesanya commented this at his YouTube channel, and answer questions revolving around the boxing event.

“For me, it was entertaining in this is the matchup, I guess. The chess match, you know, a little but of a sloppy chess match at some points, but yeah, chess match nonentheless.”

The fight was definitely a chess match, with Tyron Woodley and Jake Paul carefully picking each other apart to go the distance.

While Jake Paul was busier with his hands and executed more volume, Tyron Woodley remained more steadfast. While ‘The Chosen One’ had relatively more success with power shots, he could not produce enough activity to win on the judges’ scorecards.

“Jake’s speed in the beginning, like his combos, the three-pieces he was throwing, his shot selection. It was nice. I knew Tyron could close the gap well. Surprisingly, he didn’t try and jump on him straight away, and surprisingly, he was just waiting. And sometimes, when Jake’s resting or has a moment or few moments where he is stagnant, he’s still doing something, showing something.”
Shifting his focus to Tyron Woodley’s performance inside the ring, Israel Adesanya said:

Giving his own opinion regarding the bout, Israel Adesanya said:

“I thought Paul won. I don’t know what the other judge gave it to Woodley for.”