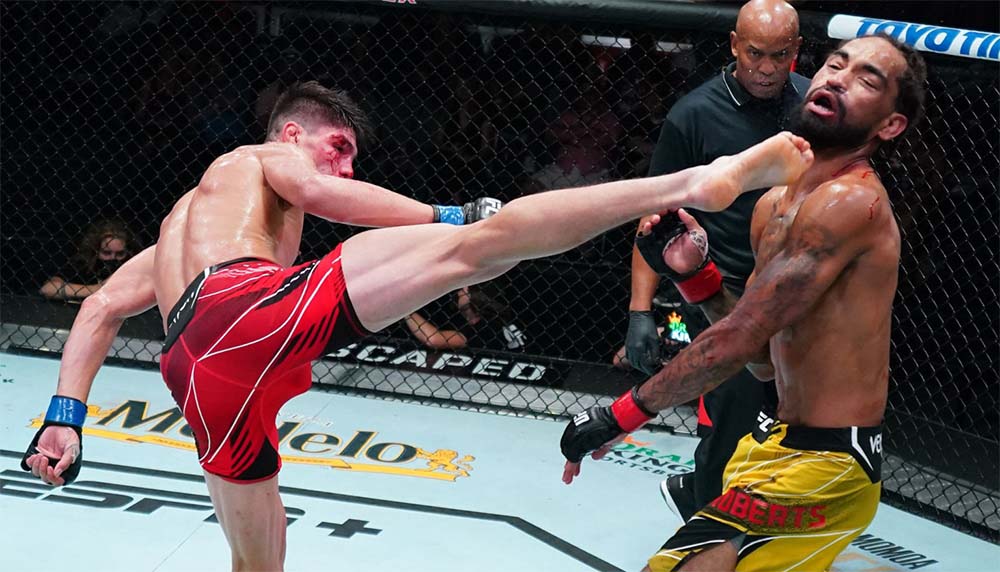 The leading MMA promotion of the planet-UFC, as always, distributed bonuses in the amount of 50 thousand dollars after the completion of its next event, which recently went out in Las Vegas at the UFC Apex arena. After UFC on ESPN 29, four fighters picked up an extra $50,000 for their performances in Las Vegas.

‘Performance of the Night’: Ignacio Bahamondes

Ignacio Bahamondes (12-4 MMA, 1-1 UFC) was on his way to a decision win against Roosevelt Roberts (10-3 MMA, 4-3 UFC). He threw four spinning back kicks to Roberts’ body throughout the fight. With time winding down, instead of cruising to the scorecards, Bahamondes threw the kick one more time – but up high. He caught Roberts clean in the head and put him out cold with just five seconds left in the fight.

‘Performance of the Night’: William Knight

William Knight (10-2 MMA, 2-1 UFC) was backing up against Fabio Cherant (7-3 MMA, 0-2 UFC), who was pressing him toward the fence looking for some momentum, or maybe even a stoppage. And while Cherant was throwing a punch, while Knight was backpedaling, he threw a left hook – and it landed straight without even getting a chance to fully hook. Cherant hit the canvas, and Knight had his sixth first-round finish.

‘Performance of the Night’: Josiane Nunes

Josiane Nunes (8-1 MMA, 1-0 UFC) went to work early on the feet against Bea Malecki (2-1 MMA, 2-1 UFC), and she never really let up. Malecki eventually found a few opportunities to throw some of her own offense, but with time winding down in the first round, Nunes drilled Malecki with an overhand left. She fell to the canvas, and Nunes didn’t need to land any follow-up shots.

‘Performance of the Night’: Alexandre Pantoja

Alexandre Pantoja (24-5 MMA, 8-3 UFC) mostly had his way against Brandon Royval (12-6 MMA, 2-2 UFC) on the canvas. In the second round, when the fight hit the mat again, Pantoja worked his way around and took Royval’s back. From there, the rear-naked choke seemed to be merely a formality. When Royval tapped, Pantoja found himself one step closer to a potential flyweight title shot.