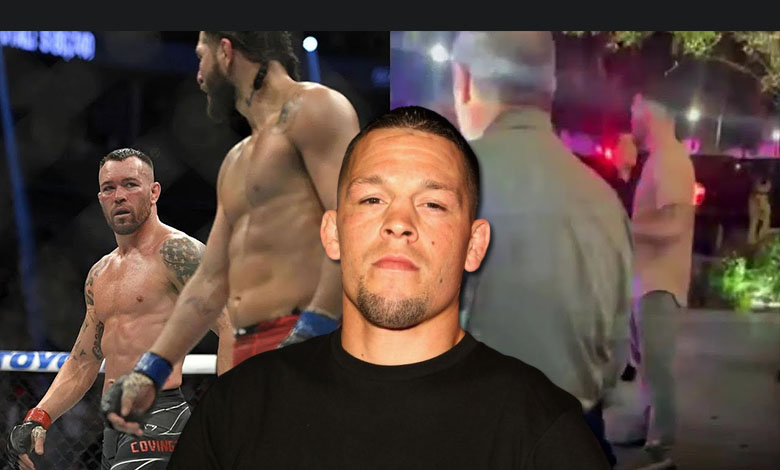 Nate Diaz has reacted after Jorge Masvidal allegedly sucker-punched Colby Covington at a restaurant in Miami.

Late Monday evening it was reported that Masvidal and Covington got into a scuffle at Miami Beach restaurant Papi Steak and police were called. It was then revealed on Tuesday that ‘Gamebred’ went to the restaurant with a surgical mask on and his hood up and sucker-punched Covington twice. Those punches allegedly broke Covington’s tooth and left an abrasion on his wrist.

After the incident, it was revealed Jorge Masvidal is now facing a felony arrest if Covington cooperates with the police, and their investigation proves Colby’s claims. With that, Nate Diaz took to social media to laugh at Masvidal for snitching on himself.

“How u gonna snitch on yourself,” Nate Diaz wrote.

Before the alleged incident at the restaurant, Masvidal went on social media to say it’s the ‘show your face challenge’ and said Colby needs to back up all the words he said.

Given Jorge Masvidal went on to sucker-punch Colby Covington, this video will no doubt be used in court showing this was a meditated attack. As Nate Diaz says, this only helps the police realize ‘Gamebred’ was the one at fault, so he basically snitched on himself.

Although Masvidal and Covington do not like one another, they fought back at UFC 272 and ‘Chaos’ dominated from bell to bell. The fight was not competitive and thus Masvidal missed his chance to legally inflict pain on ‘Chaos’. Now, he could very well spend time behind bars for this incident.

As for Nate Diaz, he continues to campaign for a fight and has his eyes set on Dustin Poirier. A rematch with Masvidal did have some appeal given it was a doctor stoppage, but after this incident ‘Gamebred’ may not fight for quite some time.