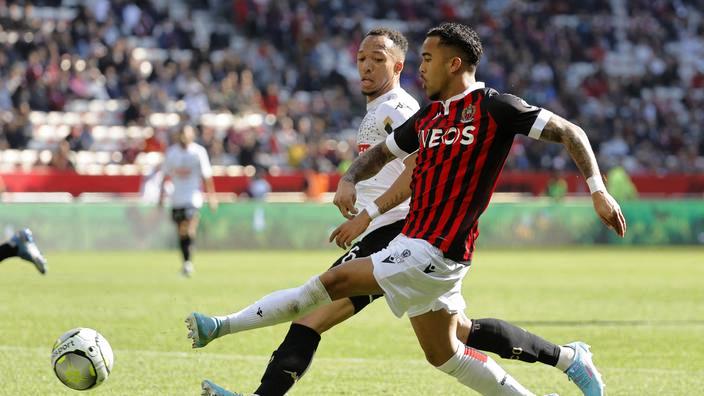 Nice are now unbeaten in six meetings against Angers after Justin Kluivert’s first-half strike sealed a 1-0 win at the Allianz Riviera.

A win would take the hosts within one point of second-placed Marseille and it seemed like Christophe Galtier’s men had got their noses in front just after the 10-minute mark.

Kluivert floated an inviting free-kick into the box and Khéphren Thuram produced a brilliant downward header beyond Danijel Petković, but after a VAR review, the goal was ruled out for offside.

At the other end, Mohamed-Ali Cho dragged a close-range effort wide when he really should have at least tested Walter Benítez, and the former Everton trainee was soon made to rue his miss.

An incisive pass down the left flank from Melvin Bard released Kluivert and despite Petković coming out to meet him, the Roma loanee slid the ball coolly past the Serbian, with no defender able to get back in time.

Andy Delort and Thuram then forced Petković to take evasive action shortly before the break, with ‘Le SCO’ struggling to impose themselves on the contest and failing to hit the target in the first period, although Souleyman Doumbia did rattle Benítez’s left-hand post from distance on the stroke of half-time.

Home fans will have been in buoyant mood as exactly two-thirds of their side’s league goals this season before today had come after the interval.

Kasper Dolberg was unable to direct Dante’s header home from virtually on the goalline when the teams returned before Delort, who scored both of Nice’s goals in the reverse victory against Angers in October, thought he had doubled his team’s advantage as his header from another Kluivert free-kick squirmed in.

Once again though, VAR deemed that the goal was offside. Delort then missed a golden opportunity to get himself on the scoresheet as he dinked over Petković – but wide.

The defeat means Gérald Baticle’s 13th-placed side have now lost four on the bounce and host mid-table Lens next weekend, while Nice travel to fellow Champions League chasers Strasbourg.