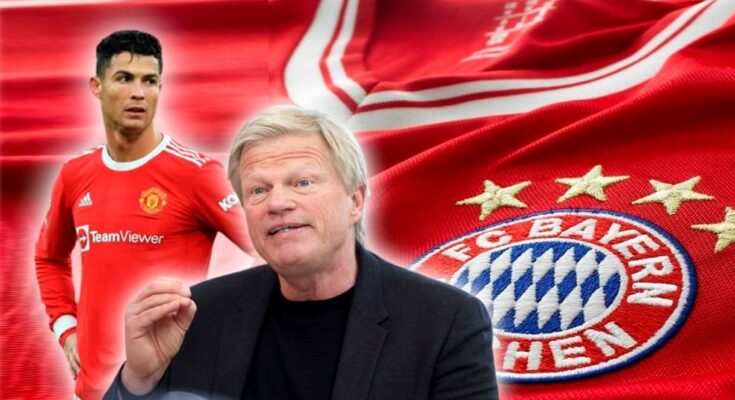 Bayern Munich CEO Olivier Kahn has revealed that the Bundesliga champions discussed a possible transfer for Manchester United star Cristiano Ronaldo internally before deciding against it.

The 37-year-old reportedly wants to leave Manchester United this summer and has been linked with quite a few top clubs, including Bayern, who saw Robert Lewandowski join Barcelona.

The German club insist Ronaldo isn’t on their agenda, and Kahn reiterated Bayern’s stance that a move doesn’t seem fit.

“We discussed about Cristiano Ronaldo internally – I consider him one of the greatest footballers ever.

“Then we came to conclusion that, despite appreciation for Cristiano, he would not fit into our philosophy in the current situation.”

Kahn didn’t elaborate on their reason behind rejecting Ronaldo but Bayern are clearly very much out of the question for the Portuguese now.

This now reportedly leaves Chelsea and Atletico Madrid as the only clubs that can go through with a transfer for the former Real Madrid ace.

The Blues have distanced themselves from the rumors lately but with the uncertainty surrounding Timo Werner’s future, they could pull off a U-turn and push for Ronaldo.

Atletico are the surprise potential suitors for him, given the long-standing rivalry between them.

Ronaldo is even willing to take a 30% pay cut to force a move away from Old Trafford, where he made a sensational return just last year and struck 24 goals in all competitions.

Manchester United, however, still insist he’s not for sale.

He’d been conspicuous by his absence from Manchester United’s pre-season tour but Ronaldo returned to the training ground on Tuesday.

The day before that, he arrived in Manchester for the first time this summer.

It’s unclear what came out of their discussions but the Portuguese’s agent, Jorge Mendes, is still pushing for a transfer, according to transfer expert Fabrizio Romano.

With no club going forward to make a bid, Ronaldo’s future remains up in the air.