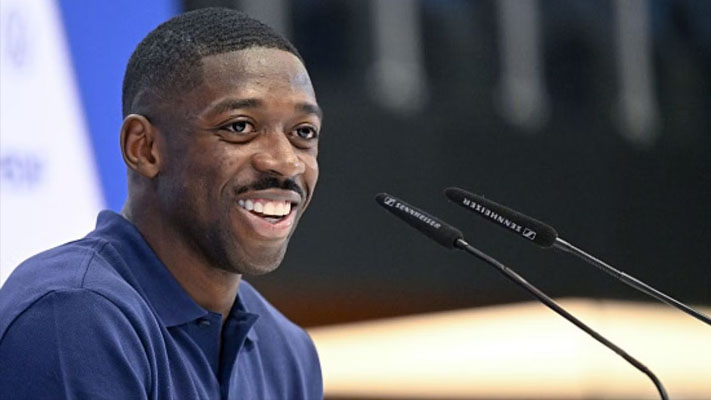 Die Mannschaft suffered a surprise defeat at the hands of Hajime Moriyasu’s side despite taking the lead through an Ilkay Gundogan penalty in the 33rd minute.

It was a phenomenal turnaround staged by Japan in the second half, with goals from Ritsu Doan (75′) and Takuma Asano (83′) proving decisive.

Football fans across the globe were stunned by Germany’s loss, which follows Argentina’s shock 2-1 defeat to Saudi Arabia on 22 November.

Dembele was taking part in a pre-match press conference ahead of France’s clash with Denmark on Saturday, 26 November, when he heard the news of the result.

He reacted hilariously in almost disbelief that the Germans had suffered a FIFA World Cup opening loss.

You can watch his reaction below:

The defeat sent Germany to the bottom of Group E, which also consists of Spain and Costa Rica.

Hansi Flick’s men face La Roja on Sunday, 27 November, in what is now a vital clash for the Germans.

Dembele’s French side had no problem dispatching Australia in their FIFA World Cup opening game.

The Paris Saint-Germain forward has now bagged five goals and two assists in eight appearances at the international tournament.

Deschamps said that Mbappe is one of the best players in the world and that he is growing in confidence (via PlanetSport):

“Kylian of course has been one of the best players in the world for some time now and he is feeling very confident, you can see that in the way he is playing.”

The French coach then vowed that the FIFA World Cup is his competition, adding:

“I knew that he was going to be ready for this World Cup, it is his competition, he knows how to make the difference.”

Deschamps did remind fans that Mbappe plays in a team stacked with attacking talent but that the France striker is an outstanding one:

“But he is part of a team and he has always been able to play as part of a team even though he is an individual, flair player as well. So that is great for us. I have got a lot of attackers, but Kylian is of course an outstanding one.”

Aston Villa star admits he was star struck while facing Argentina captain Lionel Messi – “He’s walked out with a Messi shirt for me, brilliant!”