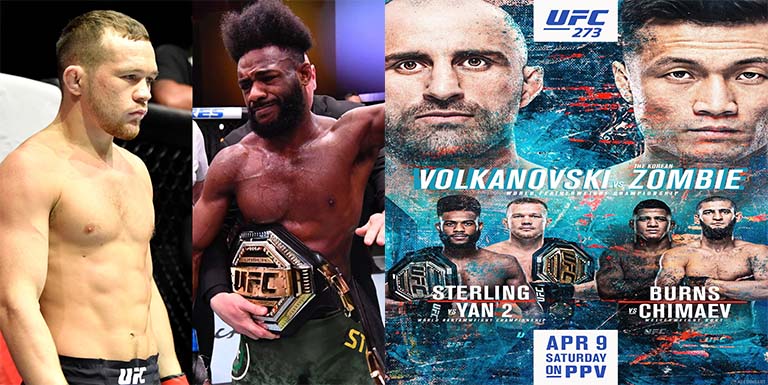 Russian superstar Petr Yan has set foot on US soil ahead of his high-stakes rematch with title rival Aljamain Sterling, and has vowed to reclaim the throne when the warring foes step into the cage at UFC 273 next month.

Yan, the former undisputed UFC bantamweight champion, lost his title to Sterling in hugely controversial circumstances last year when he was disqualified for landing a clearly illegal knee strike to Sterling.

The American fighter was dazed by the shot which occurred in a fight in which he was behind on the scorecards and was subsequently declared unable to continue by cageside doctors, winning the bout – and the world title – by disqualification.

Petr Yan, though, has repeatedly maintained in the months which followed that he believes that Sterling was ‘faking’ the injury and that he could have continued the fight if he wanted to, but suggested instead that he took the easy way out.

Yan’s frustration was compounded by Sterling, who had initially left the belt in the cage after the fight in a signal that he was unhappy with the fight’s climax, quickly changing his tune and declaring himself the undisputed world champion in spite of the bout’s controversial conclusion.

But ahead of their rematch which will finally take place at UFC 273 on April 9, Petr Yan has fired a warning shot to his opponent after touching down in America.

“I’m on the spot! April 9, I will prove that I am the best in the world!” the 29-year-old said alongside an image of him at a Miami airport.

Yan’s comments come after several members of his corner team were reportedly struggling to obtain visas to enter the United States, meaning that the Russian fighter would have to hastily assemble a new staff to put him through his paces between now and fight night, as well as in-between rounds at UFC 273.

Russia’s ongoing military operation in Ukraine has led to visa applications for some Russian citizens to be rejected. Petr Yan is understood to possess a multi-year US visa and his entry into the country was unaffected.

Petr Yan has joked about the matter on social media, asking the likes of rising UFC star Sean O’Malley and even Khabib Nurmagomedov to corner him for the fight.

A member of Yan’s team has recently said that he will at least have the services of manager Sayat Abdrakhmanov and veteran trainer Alexei Sorokin in his corner. But whoever ends up walking him to the cage in Jacksonville, Florida next month, Yan says that the Sterling rematch will be a mere formality.

“My long training camp has come to an end, thank you to all the people who were close to me. All that remains is to arrive, make weight, and do my job,” he said in an Instagram video, via translation.