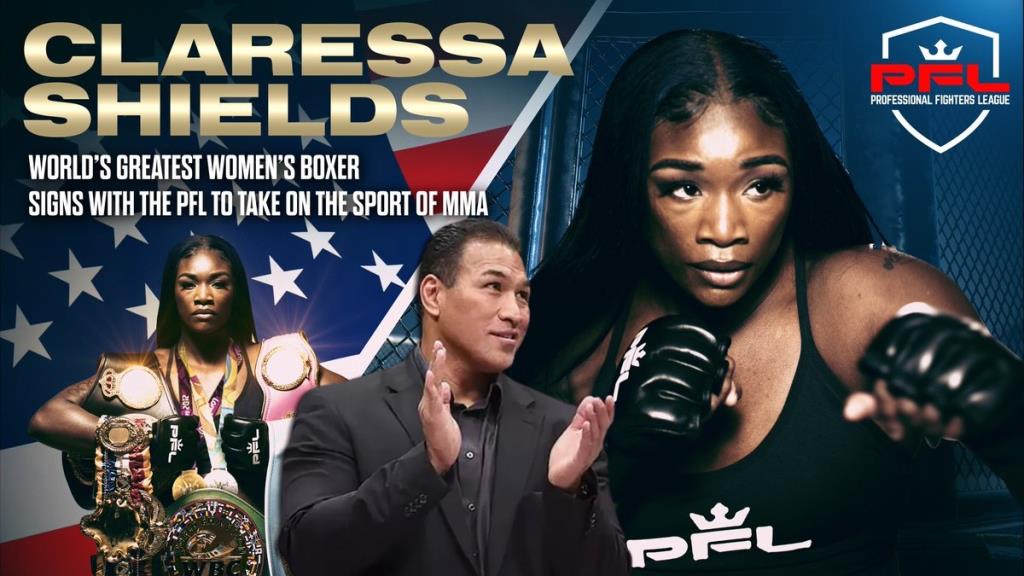 The combat sports world was watching recently when multi-time boxing champion Claressa Shields made her mixed martial arts debut but her first fight was anything but easy.

The 26-year-old Michigan native struggled through the first two rounds as opponent Brittney Elkin was able to drag her to the ground, move into the mount on multiple occasions and threaten with strikes and submission from a dominant position on top.

Despite a rough start, Shields still managed to deliver an emphatic finish in the third round after stuffing a takedown attempt from Elkin and then brutalizing her with punches until the fight was stopped. Shields had every reason to celebrate her victory but it was clear that she still had a long way to go until she was taking on more experienced opponents and a higher level of competition.

“I thought she was very composed,” PFL president Ray Sefo said about Shields’ performance when speaking to MMA Fighting. “In the first round, I was a little bit concerned but in the second round she showed a lot more [composure] and the way that she dealt with being on the bottom. Obviously her coaches, [Mike] Winkeljohn and Greg Jackson both told her you’ve got to go out there and go for gold.

“The thing that was more impressive was that she actually won the fight on the ground rather than standing on her feet where she was able to control Brittney and being heavy on top and ground and pound.”

While all eyes were on Shields crossing over to MMA, she definitely had a tougher road to travel considering she has been boxing all her life but never competed in other sports like wrestling or even a martial art like judo or karate.

That means Claressa Shields was learning all of those skills within the past year that she made the decision to test herself in MMA and Sefo acknowledged that she’s still got a long road to travel before taking on the best fighters in the world.

Sefo understands the difficulties involved with strikers making the move to MMA after he experienced those same growing pains after he transitioned from his career as a world-class kickboxer.

“I remember first time actually fully training MMA, I thought I’m a good striker, I can just keep them at bay,” Sefo explained. “I got taken down and I think it was Jay Hieron that did that, he fought at 170 and I couldn’t believe how heavy he was on top but this is a guy that comes from a wrestling background.

“It’s a different sport. There’s a lot to learn, not only your wrestling but also your jiu-jitsu game. There is a lot to learn and hopefully she’ll pick it up fast.”

PFL made a long-term investment in Claressa Shields by signing her to a multi-year deal, which means there’s no particular rush to get her involved in the next season in 2022.

Sefo saw enough in Shields’ debut to know she’s got a lot of potential but how she learns, grows and evolves as a fighter moving forward will determine when she’s ready for much stiffer competition.

“Right now, we’ll have to wait and see what happens in the next fight,” Sefo said. “If we go off her last fight in those first two rounds where she was in trouble, 100 percent I would say that she needs a few more fights under her belt to really feel comfortable in there.

“We will do our job to continue to give her those fights so she can gain more experience and hopefully be ready for either for 2022 or 2023 season.”