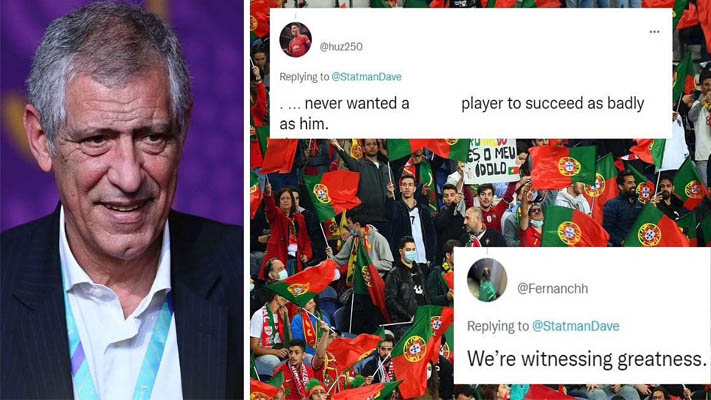 Portugal fans were left wowed by right-back Diogo Dalot‘s performance in the side’s 4-0 win over the Czech Republic on September 24.

The Manchester United defender scored a mesmerizing brace on the night alongside goals from Bruno Fernandes and Diogo Jota.

Dalot was man-of-the-match on having put on one of the best performances of his international career to date.

His first goal came in the 33rd minute when the right-back got on the end of Rafael Leao’s brilliantly threaded pass.

It was the first international goal of Dalot’s career and he wasn’t done there.

Fernandes then grabbed the Portuguese side’s second before Dalot was once again on the scoresheet.

This time, the United full-back cut inside and sent a wonderful left-footed finish past Czech goalkeeper Tomas Vaclik from outside the box.

The former FC Porto right-back was energetic and lively throughout and was evidently seeking an unlikely hat-trick.

That third goal didn’t come, but his outing against the Czech Republic has been met with acclaim from fans who want to see him improve further.

Dalot has already been catching the eye for United this season, making eight appearances and contributing two assists for Erik ten Hag’s side.

He is surely pushing for a regular starting berth in Fernando Santos’ Portugal side off the back of an impressive performance.

Here were some reactions from fans on Twitter to Dalot’s brilliance:

Dalot is starting to live up to expectations following his £19.8 million move from Porto to United back in 2018.

The right-back struggled for game time at the start of his Red Devils career.

He spent the 2020-21 campaign on loan at AC Milan where he impressed with two goals and three assists in 33 appearances.

There was a feeling that his switch to Milan may become permanent but that luckily didn’t turn out to be the case for United fans.

Dalot is excelling at the start of the new campaign and is making the right-back position at Old Trafford his own.

His performances on international duty for Portugal are only getting better and better and tonight’s outing was one to remember.

Dalot may be one to watch not only for United this season but also at the 2022 FIFA World Cup with Portugal.