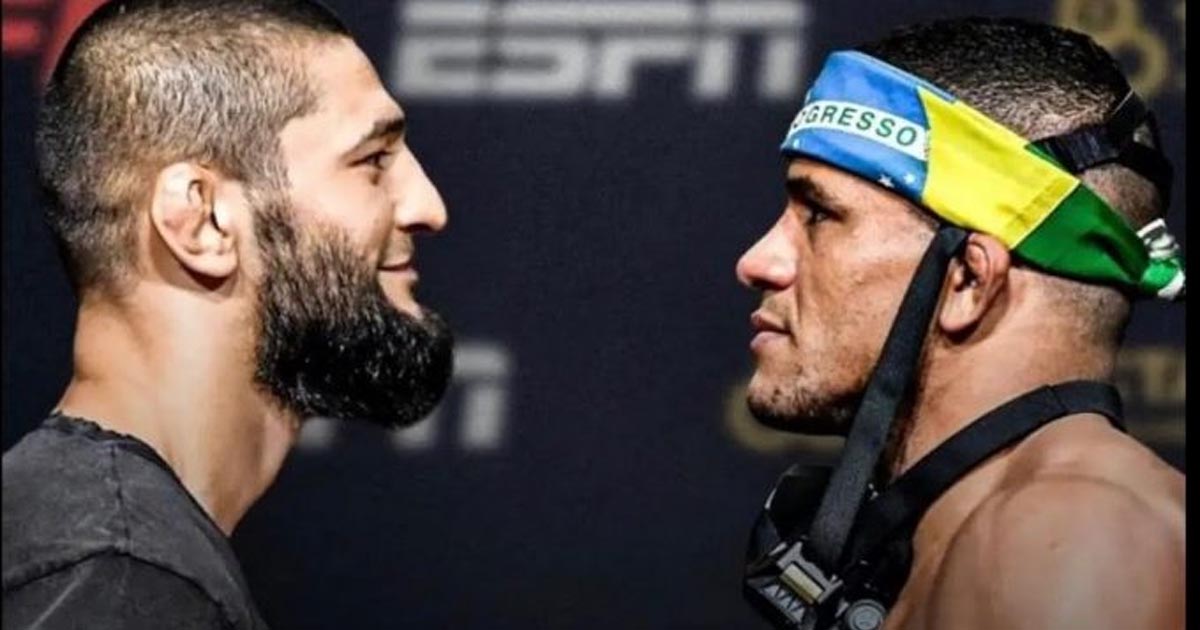 On the main card of UFC 273, a very intriguing welterweight matchup goes down as Gilbert Burns takes on the undefeated and hyped-up, Khamzat Chimaev. Heading into the fight, Burns is a +375 underdog while the Swede is a massive -510 favorite.

While the majority of pros are picking Chimaev, some think the odds for the contest are off, believing Burns can make this is a tough fight and possibly get the win.

Pro fighters make their picks for Gilbert Burns vs. Khamzat Chimaev ahead UFC 273:

Alexander Volkanovski, UFC featherweight champion: I see Chimaev, he truly is the real deal and people will be blown away by his performance against Burns. I have a feeling he will be able to manhandle him.

Stephen Thompson, UFC welterweight: Khamzat Chimaev for sure. He is a bigger body, better wrestler, and has more power. He could wrestle himself into submission but Gilbert has struggled against wrestlers.

Ian Garry, UFC welterweight: Dude, it’s a huge fight. Gilbert is an animal and then you have Khamzat who is the most talked-about fighter and no one really knows how good he is. It’s a tough fight for both guys because a wrestler vs a grappler is always tough but it’s interesting. Both guys are going to bang, and I don’t think Khamzat isn’t scared of Gilbert’s grappling and Gilbert isn’t scared of Khamzat’s wrestling. Obviously, I think During goes out there and smashes him but I don’t think it’s an easy fight for either guy.

Terrance McKinney, UFC lightweight: Gilbert Burns, this is too much of a step up for Chimaev.

Ike Villanueva, UFC light heavyweight: Chimaev is the future, that kid has got it. I like his style, he has power, dominates wrestling and his strength will allow him to dominate Burns.

Tristan Connelly, UFC featherweight: We are all wondering just how good Chimaev is. I’m going with Chimaev, he seems like the real deal but I don’t think it will be a blowout as some may think.

Dustin Jacoby, UFC light heavyweight: I’m going to go with Chimaev, while it’s a very tough fight, I think he’s the real deal. I saw him in Vegas and he can wrestle and has a ton of power, it will be a great fight but I’m sticking with the hype train.

Vinc Pichel, UFC lightweight: I have to go with Burns, he is so good on the ground and can cause some problems for Chimaev.

Gabe Green, UFC welterweight: It’s such a tough one and will be a fun one to watch. I’ll say Chimaev but I truly don’t know.