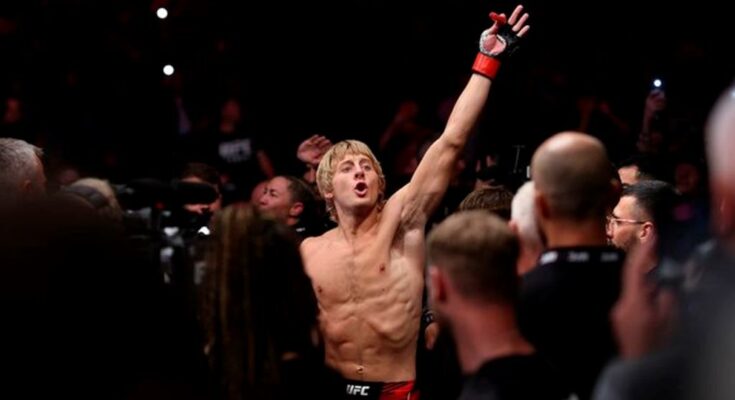 Paddy Pimblett (19-3 MMA) had most previously competed in March of this year, earning a first round submission victory over Rodrigo Vargas. That win had extended Paddy’s win streak to four in a row.

Meanwhile, Jordan Leavitt (10-2 MMA) had last competed in April of 2022, where he earned a split-decision win over Trey Ogden. ‘The Monkey King’ had put together a 3-1 record since joining the UFC ranks in December of 2020.

Pimblett vs. Leavitt resulted in another stoppage win for ‘Paddy the Baddy’. After a back and forth opening round, the Liverpool native was able to take the back of his American opponent early in round two. From there, ‘The Baddy’ promptly sunk in a rear-naked choke which forced Leavitt to tapout.

Paddy Pimblett had an outstanding performance at UFC London but it was his post-fight message that has everyone’s attention.

Pimblett came across as a total superstar and he gave fans in attendance plenty to cheer for.

During his post-fight interview with Michael Bisping, Paddy Pimblett shared that a close friend of his committed suicide mere hours before the UFC London weigh-ins this past Friday.

“I woke up on Friday morning at 4 AM to a message that one of my friends back home had killed himself. This was five hours before my weigh-in. So Ricky, lad, that’s for you. There’s a stigma in this world that men can’t talk. Listen, if you’re a man, and you’ve got weight on your shoulders and you think the only way you can solve this is by killing yourself, please speak to someone… I know I’d rather have my mate cry on my shoulder than go to his funeral next week. So please, let’s get rid of this stigma and men, start talking!”

Megan Olivi showered praise on the 27-year-old for promoting the topic of mental health.

Jamahal Hill shared a personal incident and echoed ‘The Baddy’s’ message about asking for help.

A few more tweets in response to Pimblett’s performance and speech can be seen below: