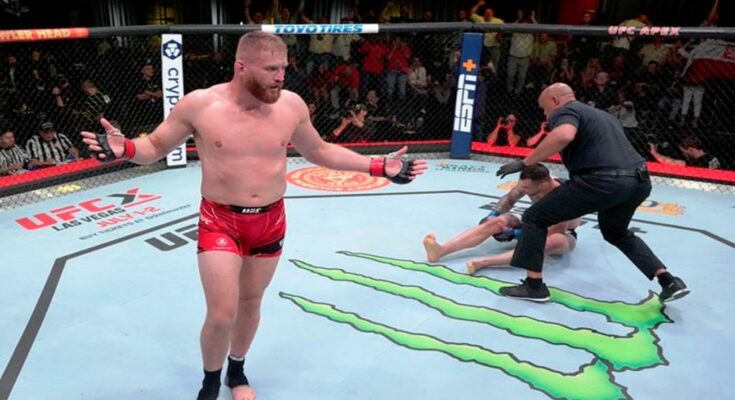 The Octagon returned to Nevada for UFC Vegas 54 event, an eleven-bout fight card headliner by Jan Blachowicz vs. Aleksandar Rakic.

Blachowicz (28-9 MMA) returned to action for the first time since losing the UFC light heavyweight title to Glover Teixeira in October of 2021. Prior to that setback, the Polish standout was riding a five-fight winning streak.

The fight went the distance of 3 rounds.

Round three of the UFC Vegas 54 main event begins and Rakic snaps a left hand. Blachowics returns fire with a low kick and then a two-punch combination. Aleksandar swings and misses with a wild uppercut attempt. He lands a follow up jab. Blachowicz looks to come forward and Rakic steps back and appears to blow out his knee.

He collapsed to the ground and Jan Blachowicz took mercy by not unleashing any ground and pound before the referee ultimately stepped in. That looked nasty. This one is over.

Professional fighters reacted to the fight between Jan Blachowicz and Aleksandar Rakic at UFC Vegas 54 bellow:

Jan Blachowicz vs. Aleksandar Rakic – Blachowicz def. Rakic via TKO at 1:11 of Round 3

Ryan Spann vs. Ion Cutelaba – Spann def. Cutelaba via submission at 2:22 of Round 1

Frank Camacho vs. Manuel Torres – Torres def. Camacho via TKO (punches) at 3:27 of Round 1

Michael Johnson vs. Alan Patrick – Johnson def. Patrick via KO (punches) at 3:22 of Round 2

Nick Maximov vs. Andre Petroski – Petroski def. Maximov via technical submission (anaconda choke) at 1:16 of Round 1