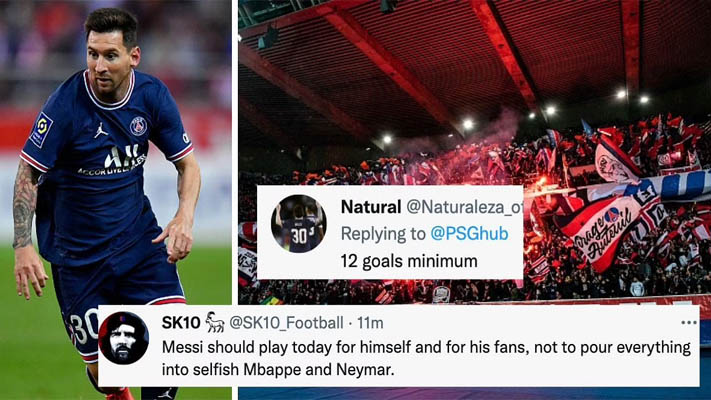 Messi lines up in Christophe Galtier’s side’s star-studded attack, alongside Mbappe and Neymar.

The trio have been on fire so far this season but there have been murmurs of unrest between the three.

Many believe Mbappe is selfish. The Frenchman appeared to walk away from a counter-attack in PSG’s 5-2 win over Montpellier last month.

The forward has been on fire, hitting nine goals in seven appearances.

Lionel Messi has been a big part of that as he has flourished at the start of the new season.

The Argentine has four goals and seven assists in nine appearances and is recapturing the incredible form he achieved at Barcelona for so many years.

However, fans are urging the Argentinian not to pass to his ‘selfish’ teammate.

The duo are joined by Neymar in attack for PSG, with Vitinha and Marco Verratti in midfield.

Nordi Mukiele is handed a start at right-back with Sergio Ramos, Marquinhos, Danilo Pereira and Nuno Mendes joining him in defense.

All eyes are on how Galtier’s front three fare as they look to wreak havoc against the Israeli opposition.

Here are some reactions from Twitter to Galtier’s XI which has led to many calling for Lionel Messi to ignore Kylian Mbappe:

Neymar has started the season on fire amidst speculation of a rivalry with Kylian Mbappe.

The Brazilian’s future at the Parc des Princes had seemed uncertain in the summer with there being rumors he may depart.

Galtier has lauded the form of the Brazilian, saying (via Yahoo!):

“Neymar has had a realisation in relation to last season when he didn’t perform as well, when he was less involved.

“It would be facile to suggest that his good start to the season is only down to me and my staff. He arrived back on time, in great shape, and had worked well beforehand. He’s an artist, and when he’s on form, you can see that.”

Tonight may be another night for fans to cast their eyes on the Brazilian, who is playing some of the best football of his career.

He is up against a Maccabi Haifa side that lost 2-0 to Benfica last time out. Dylan Batubinsika and Sean Goldberg have a huge job on their hands.