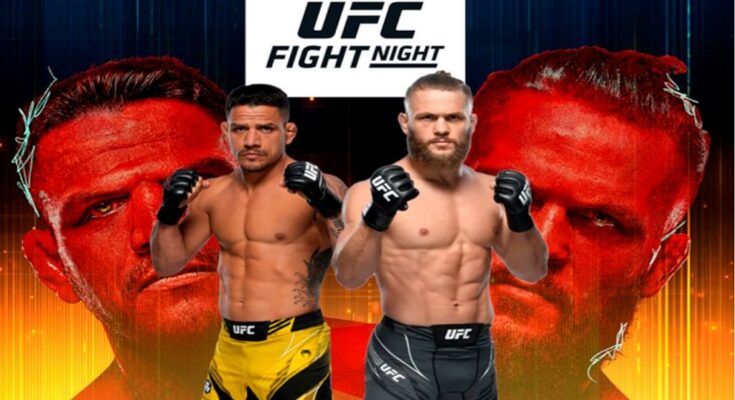 Rafael Dos Anjos and Rafael Fiziev will fight on July 9 at UFC Apex Arena in Las Vegas, Nevada, USA in the main event of UFC on ESPN 39.

Bookings in the UFC don’t always come around again if cancelled. In the case of Rafael Fiziev, he feels lucky one did – twice.

A rising lightweight contender, Fiziev (11-1 MMA, 5-1 UFC) is happy the UFC rebooked him to fight former champion Rafael dos Anjos at Saturday’s UFC on ESPN 39 after their original meeting fell through.

Originally slated to headline a Feb. 19 event, the matchup was delayed to UFC 272 in March due to Fiziev’s visa issues. Shortly before that fight week arrived, Fiziev tested positive for COVID-19, and the matchup was scrapped.

“When this fight happened a second time, and he agreed to fight, I thought, ‘Wow, he agreed,’” Fiziev told reporters including MMA Underground at a UFC on ESPN 39 news conference Thursday. “I’m happy for this because I think after he fought (Renato) Moicano he’d say, ‘I don’t want to fight with him again. Why do I need it?’ But he said yes, and I’m like, ‘Wow, that’s good.’ He’s a man.”

Fiziev thinks his Brazilian opponent is a stern test. He’s excited to show fans what he’s capable of doing against top-tier opposition.

“I like the challenges and this guy is a big challenge,” Fiziev said. “That’s why I’m more happy because he’s a former champion and I (want to) try my skills on a guy who already (had) gold on his body.

UFC on ESPN 39 takes place Saturday at the UFC Apex and airs on ESPN/ESPN+.