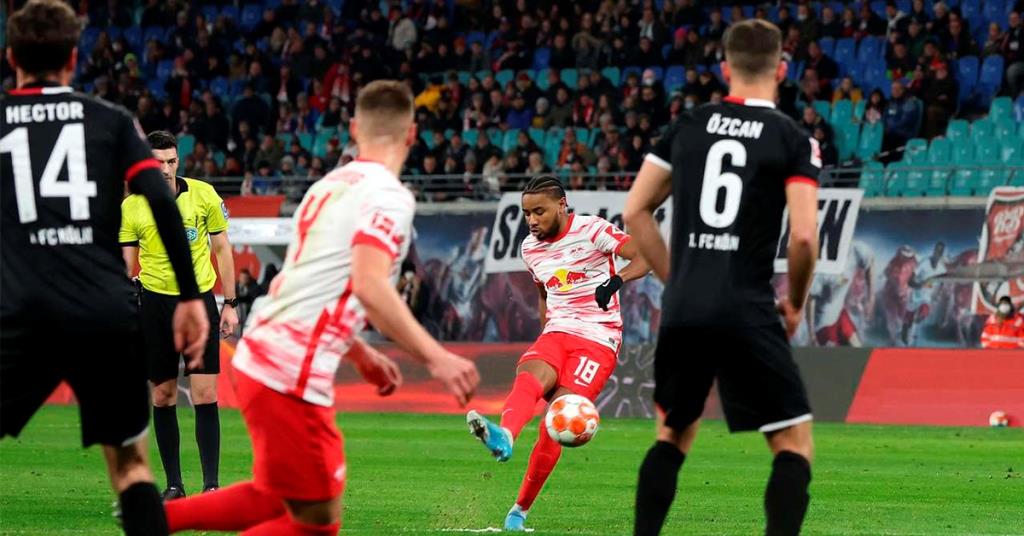 RB Leipzig moved into the Bundesliga top four for the first time this season after a commanding 3-1 win over Cologne. Last season’s runners-up are being charged by their phenomenal home form, claiming 27 of their 34 points at the Red Bull Arena.

With the sides separated by just a point at kick-off, rather unsurprisingly, there was very little to split them in a cagey opening to this contest.

‘Die Roten Bullen’ looked more threatening, but had to wait until the 25th minute for their first shot on goal. Luckily for them, that effort nestled into the corner, as Christopher Nkunku’s pinpoint free-kick gave his side the lead.

The Frenchman showed tremendous technique to tuck the ball into the corner, well beyond the reach of Marvin Schwäbe. Remarkably, that strike took Nkunku’s goal and assist tally for the season to 32, having played just 31 games.

Domenico Tedesco’s men then doubled their lead within 10 minutes of the restart. Dani Olmo found himself in space from 25 yards, and the Spaniard unleashed a low-driven effort into the bottom corner.

After a disrupted start to the campaign, Olmo found the net for the first time in the Bundesliga this season, putting daylight between his side and Cologne.

Olmo turned provider moments later as the hosts added a third. A swift counter unpicked the ‘Billy Goats’ defence before Angeliño was slotted in, tucking his close-range effort home to net his first league goal since November 2020.

Leipzig’s third ended the game as a contest, leaving the home faithful rejoicing their upturn in form, winning four of their last five matches. Steffen Baumgart’s side never offered much threat, despite a late consolation from Tim Lemperle, squandering their chance to move into the top four after losing for the first time in six on the road.