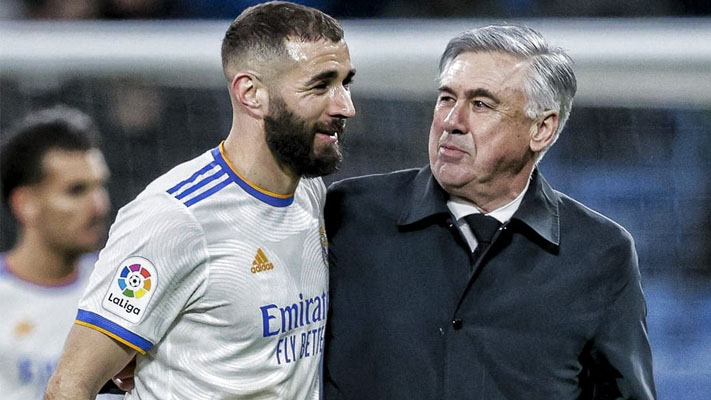 Los Blancos are set to face Atletico Madrid in the Madrid derby on September 19. However, Ancelotti’s star striker, Benzema, has been out of action since his team’s 3-0 win against Celtic on September 6.

The French striker was forced to withdraw during the game as he suffered a muscular injury.

The Madrid giants defeated RB Leipzig in the UEFA Champions League on September 15. Fede Valverde and Marco Asensio scored in the 80th minute and in injury time respectively to secure a second straight win for the competition’s record winners.

However, they will now have to shift their focus to Atletico Madrid as Ancelotti’s side look to continue their hundred percent winning start to the campaign.

The Italian manager was questioned by the media after his team’s game in the UEFA Champions League about whether Karim Benzema could be expected to take part in the Madrid derby.

Ancelotti provided a pragmatic answer to the query, as the 63-year-old stated (h/t as.com):

Benzema has been in supreme form this season as he has scored four goals and provided one assist in six games for Los Blancos so far this season.

His form is a continuation of last season, as he scored 44 goals and provided 15 assists in only 46 games for the Madrid giants during the 2021-22 campaign.

Ancelotti has relied on the likes of Eden Hazard and Rodrygo to spearhead Real Madrid’s attack in the absence of his marquee player. Whether he will have to resort to those options in the upcoming Madrid derby remains to be seen.

Fede Valverde has been absolutely phenomenal for Real Madrid so far this season. The midfielder scored a wonder goal during his team’s 4-1 win against Real Mallorca this past weekend.

He once again put on a solid performance and scored a goal against RB Leipzig. Ancelotti hailed the player’s ability and stated that he was surprised when Valverde scored only one goal last season, as he told the media.

“What seemed strange to me is that he only scored one goal last season. I told him if you are not capable of scoring more than ten goals, I have to tear up my coaching card. He has a stone in his foot.”