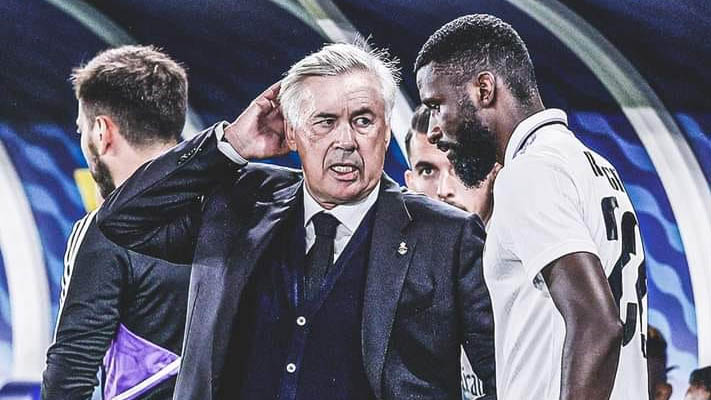 Real Madrid defender Antonio Rudiger was taken aback by the humility of manager Carlo Ancelotti upon arrival at the Santiago Bernabeu.

Rudiger joined Real Madrid as a free agent this summer following the expiration of his contract with Premier League club Chelsea.

The German centre-back has made nine appearances this season with Madrid on a nine-match winning streak in all competitions thus far.

Ancelotti has received huge praise from Rudiger for how the Italian helped with his transition from Chelsea to Madrid.

“I had only been in our new house with my family for a few hours – we were just barbecuing – and the doorbell suddenly rang. I opened it and Carlo Ancelotti was just standing in front of me. A wow moment. He sat down at the table with us, ate with us and got to know my family.”

Rudiger commented on the type of personality Ancelotti has:

“Very normal, very down-to-earth. He was there for two hours, we talked about everything.”

Rudiger believes Ancelotti is the best man-manager in the game:

‘I’ll be honest, I’ve never experienced anything like it, no coach has ever done something like that for me. After the few months with him, I have to say: When it comes to dealing with players, Ancelotti is untouchable.”

“Stop Don Carlo, a coaching legend – he already collected Champions League titles when I was a child. Working with him every day now and at the most successful club in the world is wonderful.”

Rudiger has chosen Kroos as the player who has surprised him the most since arriving at the Bernabeu.

The duo have played together for the German national side but the defender has never held a close relationship with the midfielder until now.

He said when asked which Real Madrid player has surprised him the most (via the aforementioned source):

“Toni Kroos. We always got along well and respectfully with the national team, but we always exchanged two sentences with each other. Something like ‘Hey, how are you?’ and ‘Bye’. Maybe because we just didn’t have enough time.”

“At Real, I met another Toni Kroos. He speaks very good Spanish, is completely open and also very helpful. He has supported me with the language since day one and has offered to help me with other things several times out of nowhere. He’s a very relaxed guy.”