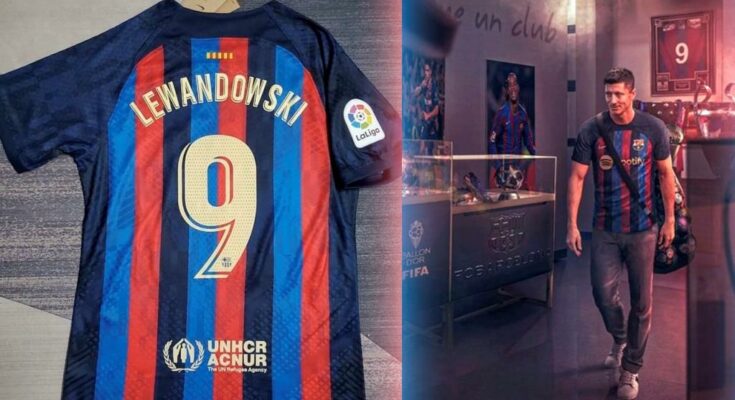 Robert Lewandowski claimed Barcelona ‘has the chance to win everything’ and praises his new teammates for their support during US pre-season tour, while boss Xavi insists the ‘big star’ will help the squad grow

Robert Lewandowski joined Barcelona on a $51.3m move from Bayern Munich. The 33-year-old made his debut against rivals Real Madrid in Las Vegas last week. The forward credited his new teammates for his quick start to life with Barca. Boss Xavi claimed Lewandowski’s humility and professionalism were great.

Robert Lewandowski has insisted his new side Barcelona has the potential to win titles after the forward pushed for a move to the Catalan side from Bayern Munich.

The 33-year-old joined the Spanish club last week on a $51.3million transfer following eight years with Bundesliga giants Bayern, where he scored 344 goals in 375 games and won countless trophies.

The forward has had a whirlwind start to life with Barcelona, being introduced last Tuesday before making his debut just 72 hours later in his new side’s Las Vegas El Clasico victory.

But he was full of praise for his new teammates for helping him swiftly settle into the squad as he claimed they have the potential to win everything.

Speaking in a press conference in Dallas, Texas on Monday afternoon the Poland international said:

“If you play for Barca, it’s normal to think about winning all the titles. If you look at our potential, I think we can have a chance to win everything. We have great potential. The young players on the team are very hungry and want to give their best performance.”

He revealed he has already developed good working relationships with the squad and insisted he is prepared to produce his best performances for the LaLiga side.

“I get along very well with my teammates. Everyone has helped me and it means a lot to me. I’m here to show the best of me. From the first day, I felt very good in the team and with my new teammates because I see that everyone is helping and supporting me. For me this means a lot. So I feel great. I know that I’m here to do my work and to do my best.”

“Of course I try to do my best and for that reason I try to score as many goals as possible but the most important thing is to win as a team.”

“The good of the team is first place and maybe second my goals. But the best solution would be if both sides were working very well from the beginning. I know the three points and winning the game is the most important.”

When asked on how long he can see himself staying at the Nou Camp, Lewandowski insisted that he still has a few more years left in the tank.

“The tests I have undergone say that my body is younger than my age. I don’t know how many years I will play at the highest level, but it will certainly be a few”, he said.

Blaugrana boss Xavi revealed he was not only happy to have Lewandowski onboard for his quality but also for his humility and professionalism.

“In my opinion he is a big star, not only a big star he is humble, professional, he is a top player in his position so he is helping us a lot. His adaptation, his professionalism, everything is good.I think the team is going to grow a lot with signing Robert Lewandowski so I’m really happy to have him in the squad.”

Barcelona will continue their pre-season tour of the US with a friendly against Italian side Juventus on Tuesday night.