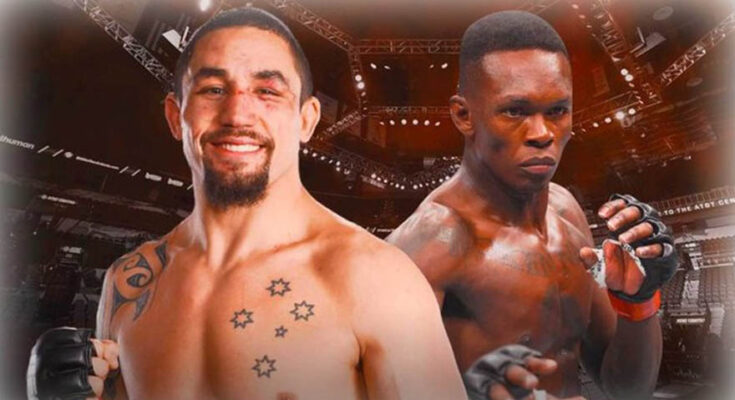 Australian mixed martial arts fighter Robert Whittaker is confident he will soon get a third fight with UFC middleweight champion New Zealander Israel Adesanya. According to Robert, he will destroy any opponent that gets in his way.

Robert Whittaker thinks he’s close to getting another crack at Israel Adesanya.

Whittaker and Adesanya first met at UFC 243 when ‘The Reaper’ was the middleweight champ and ‘The Last Stylebender’ was the interim champ.

It was Adesanya winning the fight by a convincing second-round KO. The pair would have their rematch at UFC 271 earlier this year and although Adesanya won again, it was by decision and a very close fight, so Whittaker believes if he defeated Marvin Vettori at UFC Paris in September he could earn him another title shot.

“I definitely think a trilogy is possible primarily because of the Holloway-Volkanovski trilogy fight going ahead,” Whittaker said to Fox Sports Australia. “Especially considering how close my fight was with Izzy last time, I definitely think that is a very real possibility.”

In order to get the third fight against Israel Adesanya, Robert Whittaker will need to beat Vettori in September which is easier said than done. The Italian hasn’t been an easy out for anyone but Whittaker has confidence in his skills.

“I think I’m going to be too much for him, honestly,” Whittaker said. I feel a lot better than he is across the board. Granted, he’s very tough, but I’ve fought tough people before and dismantled them. The best Rob Whittaker beats anybody. I’m going to just hit him a lot and just hurt him … he won’t be able to keep the tempo up, he’s not going to be able to handle it.”

Even though Whittaker is confident he will defeat Vettori it’s still uncertain if the UFC would book the trilogy match. Adesanya still needs to get past Jared Cannonier at UFC 276 on July 2.

After that, the winner of Sean Strickland vs. Alex Pereira seems to be next but perhaps if Whittaker has a statement win over Vettori he could get that third crack at Adesanya.

The matchup between Robert Whittaker and Marvin Vettori has been rescheduled to take place at the Ultimate Fighting Championship’s debut event in Paris.

The fight was originally slated to occur on UFC 275 on June 11 at Singapore Indoor Stadium in Kallang, Singapore. However, Whittaker had to pull out due to an undisclosed injury, meaning the two middleweight contenders will have to wait until September 3 to face off, this time at the Accor Arena in Paris, France.

Currently, Whittaker vs. Vettori is the only official match scheduled for UFC Paris, but the event is expected to be headlined by a heavyweight showdown featuring Ciryl Gane and Tai Tuivasa. There is also expected to be a women’s flyweight match between Katlyn Chookagian and Manon Fiorot.

Whittaker’s last appearance was at UFC 271, where he failed to regain the 185-pound belt in a unanimous decision loss to Israel Adesanya on Feb. 12 in Houston. Whittaker was the middleweight king for a brief time, but it came to an end in a second-round KO loss to Adesanya at UFC 243 in October 2019.

Vettori earned a shot at middleweight gold at UFC 263 after five consecutive octagon triumphs from July 2019 to April 2021, but he lost to Adesanya via unanimous decision. Although, the Italian fighter did win in his most recent appearance, when he beat Paulo Costa in a light heavyweight bout at UFC Fight Night 196 this past October.