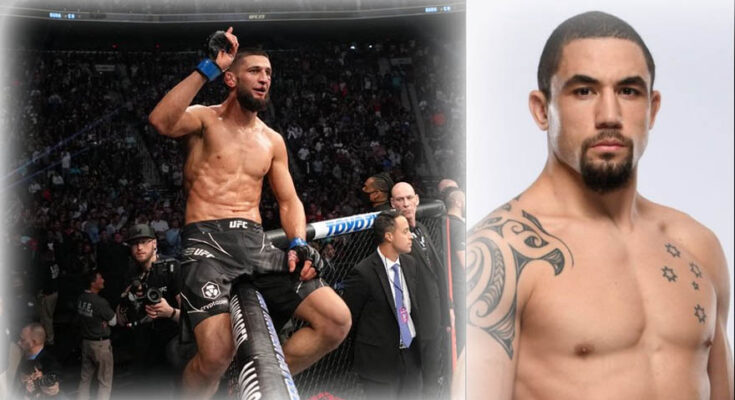 Robert Whittaker recently had a message for Khamzat Chimaev. Rob thinks as a middleweight you cant take those shots that burns landed on Khamzat.

Khamzat Chimaev vs Gilbert Burns was one of the most exciting fights fans witnessed at UFC 273.

Dana White has compared the atmosphere at UFC 273 during the Khamzat Chimaev-Gilbert Burns fight to when Conor McGregor headlined UFC Dublin.

The three-round war between Chimaev and Burns, already dubbed the Fight of the Year so far, resulted in a unanimous decision victory for ‘Borz’. The result certainly raised the stock of both men, despite defeat for ‘Durinho’, and both ended up showing respect to each other after the fight.

Khamzat had ran through his opponents before fight Burns and was seen facing some adversity in the UFC for the first time. Gilbert Burns landed some pretty heavy shots on Khamzat and even dropped him with heavy shot once. The MMA pundits believe that Khamzat was tested and came out impressive. Khamzat took a lot shots from Gilbert and also landed a lot in return.

Referring to the shots Khamzat took from Gilbert, Whittaker gave his response recently. Robert Whittaker is one of the top middleweights in the UFC. He was the champion in his division before Israel took it from him. Robert Whittekar said you can take those shots as a Middleweight that Burns landed on Khamzat.

“There are bigger guys. You can’t get away with certain things. You can’t take those shots Burns delivered on him as a Middleweight.”– Robert Whittaker on Khamzat.

Robert Whittaker had this message for Khamzat because Khamzat has his eyes on both the divisions. Chimaev even competed in the middleweight in UFC and wants to win a belt at both welterweight and middleweight. This potentially can spark talks between Khamzat and Robert and it would be on hell of a fight if it ever happens.

Robert has a great style and he can handle someone like Khamzat. While on the other hand Khamzat is relentless with his pressure and has no plans to stop irrespective of the weight class. Will this fight happen or not, only future will tell.