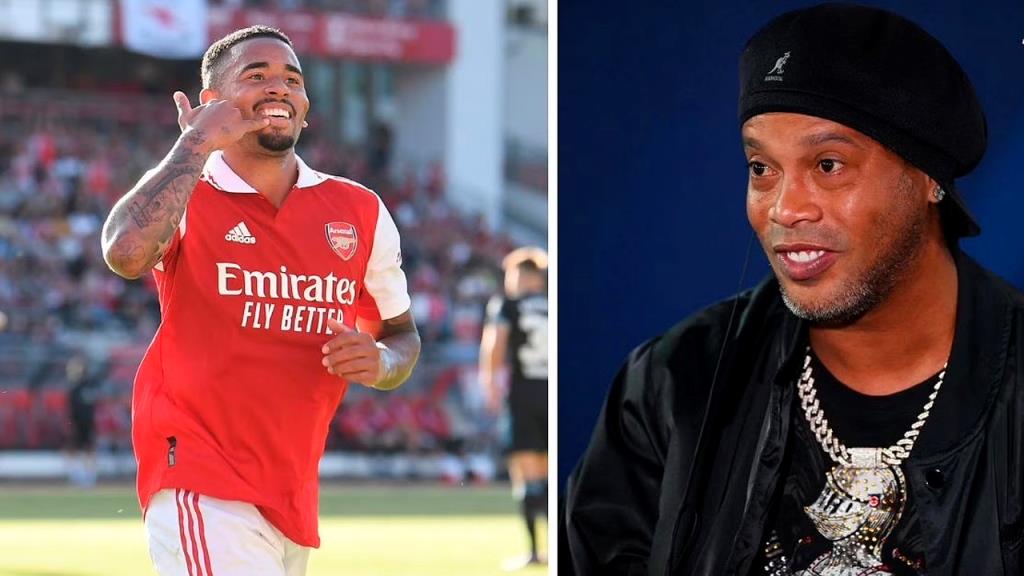 Barcelona and Brazil legend Ronaldinho has heaped praise on Arsenal striker Gabriel Jesus. He has also given an insight into why the 25-year-old striker was unable to live up to expectations during his time with Manchester City.

Jesus spent five-and-a-half seasons with City, during which he scored 95 goals in 236 appearances for the club.

Following the departure of Sergio Aguero from the Etihad Stadium at the end of the 2020-21 campaign, Jesus was expected to become the club’s first-choice striker. However, he was deployed out of position on the wings by Pep Guardiola.

The Brazilian joined Arsenal in a deal worth £45 million this summer and has become the focal point of the club’s attacks.

Jesus has been reunited with former Manchester City assistant coach Mikel Arteta, who has seemingly been able to get the best out of him and make the most of his abilities.

Ronaldinho once claimed that his compatriot has the ability to surpass Lionel Messi as the world’s best player but believes he was hindered during his time with Manchester City.

The former Barcelona star lavished praise on Jesus, in an interview with The Mirror, after the striker’s incredible start to life at the Emirates Stadium.

“When Gabriel joined Manchester City I said he would go on to be one of the best players in the world. When he was given a chance, he showed what he was capable of, but at Manchester City he was never shown the love a player of his quality deserves.

“At Arsenal he has been given the chance to be the focal point, he has been shown the love by the coach and the fans, and already he is repaying that. This season I expect big things from him, he will repay the love shown in him by showing he is not just one of the best players in the Premier League but also in Europe.”

Jesus enjoyed a sensational pre-season with Mikel Arteta’s side, scoring seven goals in five games. He produced an impressive performance in Arsenal’s 2-0 draw with Crystal Palace. The Brazilian striker then scored two goals and provided two assists in the Gunners’ 4-2 victory over Leicester City last weekend.

Arsenal were one of the favorites to finish in the top four of the Premier League midway through the 2021-22 campaign. However, a lack of quality and squad depth resulted in the Gunners suffering a massive slump in form towards the end of the campaign. They ended up finishing fifth in the Premier League table.

Arteta’s side have addressed a number of their issues by signing Gabriel Jesus, Oleksandr Zinchenko, Fabio Vieira, Marquinhos, and Matt Turner. The arrival of Jesus and Zinchenko could, however, be the major difference maker this season.

The Brazilian forward’s work-rate, speed, intensity, and link-up play have added another dimension to the north London club’s attack. Zinchenko’s defensive solidity, composure on the ball, and ability to make an impact in the final third have also elevated Arsenal’s gameplay.

The duo have arguably been the club’s standout players in their opening two Premier League games.

Arsenal were expected to mount a serious challenge for a place in the top four this season. However, Arteta’s side could potentially be title contenders if Jesus and Zinchenko continue improving and help the Gunners elevate their performances.