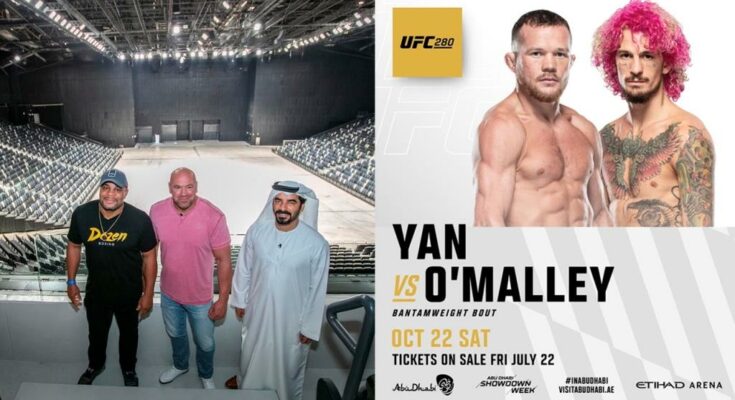 Sean O’Malley is taking a major step up in his next fight, announcing to ESPN’s Ryan Clark on Wednesday that he’ll be facing former bantamweight champion Petr Yan at UFC 280 on Oct. 22 in Abu Dhabi.

UFC bantamweight star Sean O’Malley is confident ahead of his showdown with Petr Yan.

Sean ‘Sugar’ O’Malley is fresh off his no-contest outing against Pedro Munhoz at UFC 276 earlier this month. The bout was hyped as the biggest test of his career so far, the fight sadly ended in the second round after an eye poke. For his part, O’Malley later claimed victory over Munhoz on Twitter.

Despite fighting earlier this month, the 27-year-old is already set to return. ESPN MMA broke the news today that O’Malley will fight Petr Yan at UFC 280 in October. It’ll be the former bantamweight champion’s first bout since his loss to Aljamain Sterling in April.

The matchup caught many fans by surprise, but Sean O’Malley is confident in his abilities. The bantamweight star discussed the fight in an interview on the DC & RC podcast. There, O’Malley expressed his excitement at the matchup.

Furthermore, he also commented on how massive the fight is for him. If he secures the victory, O’Malley could go from the back of the rankings, all the way to number one.

“Obviously putting Petr’s lights out would be massive but I just need to go in there and get the job done against Petr Yan. Three, five minutes rounds, he’s the best dude I’ve fought hands down. I’m very excited for the opportunity, I just believe I’m going to be better, on October 22nd, against Petr.”