Sean O’Malley predicted Aljamain Sterling vs. Petr Yan 2, weighs in on impact of the Russian not having cornermen 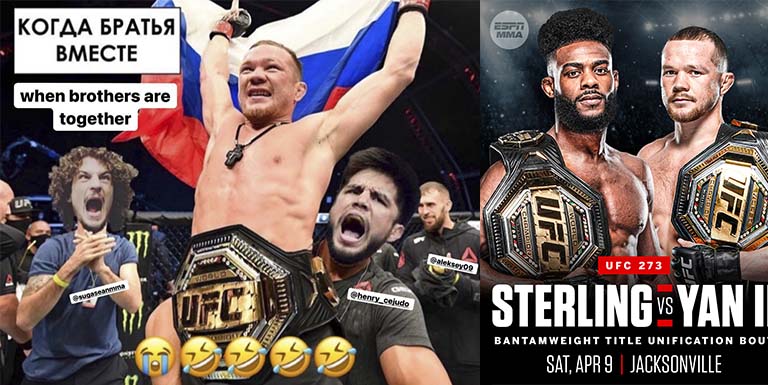 Sean O’Malley gave a breakdown of the upcoming championship rematch between Aljamain Sterling vs. Petr Yan at UFC 273.

The rising star believes Sterling will have trouble keeping up with Yan if the fight goes into the deep waters. O’Malley explained:

“Aljo is pretty jacked, he’s got a lot of muscle. For him to keep that pace, he’s got to keep those muscles going for 25 minutes [but] they slow down, they start slowing down, especially when – I think – Petr had seven takedowns… Once Also realized he couldn’t take him down, it was a mental switch. Like, fatigue started kicking in. But Also is a dangerous motherf***er! I think Also approaches this fight a lot different. And either – like you said – he gets pieced up worse or it’s a whole new fight. I’m very curious and interested in this fight now.”

The 27-year-old also said he believes Petr Yan was on his way to finishing Sterling before the infamous illegal knee took place. On top of that, O’Malley admitted that ‘No Mercy’ is one of his favorite fighters to watch, despite having an antagonistic relationship with the him online, He said:

“Petr is probably one of my most favorite fighters to watch. He’s sick!”

Sterling vs. Yan is one of the most anticipated rematches in recent history. Their first fight at UFC 259 ended in controversy as the Russian was disqualified due to an illegal knee, which resulted in ‘The Funkmaster’ being crowned the new champion.

Sean O’Malley also gave his take on the tricky situation Petr Yan finds himself in. The Russian superstar won’t have his usual cornermen in the fight after they were denied visas to travel to the United States.

O’Malley is of the opinion that the conundrum won’t affect Yan’s performance. He tried to put himself in the interim bantamweight champion’s shoes, saying:

“I said this before, if I could pick one person [to corner me], I’d pick Tim in my corner, I’d feel comfortable. Having Tank and Brandon there is f***ing a bonus. If I didn’t have Tim in there it would be weird. I don’t know if it would affect my performance but it would be weird.”