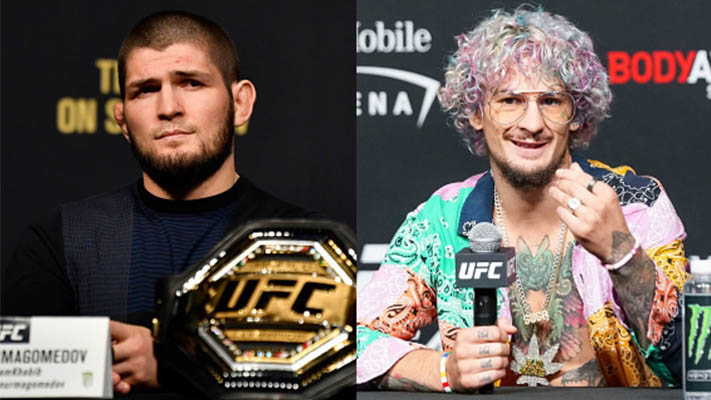 In a recent interview, Sean O’Malley shared his acknowledgment and appreciation of the praise from Khabib Nurmagomedov. The Russian had previously stated that the bantamweight is the “real deal.”

‘The Eagle’ has a keen eye for talent and has been public with his analysis of fighters ever since retiring from the sport of mixed martial arts. He was arguably considered the best fighter in the world in 2020. The Dagestani, though, decided to walk away from MMA following his father’s unfortunate death.

Discussing the praise he received from Khabib Nurmagomedov, Sean O’Malley insisted that it was nice to receive such comments from the Russian. He asserted that true fight fans know his level of ability.

“Yeah, that’s cool. Like I said about the high-level fighters when they talk about me versus Petr [Yan], I think high-level fighters see I’m a legit mother***er. I’m not just fancy and do all this crazy sh**, I have legitimate skills, so it was really cool, to be honest. I thought hearing something like that from Khabib is, you know, he’s one of the G.O.A.T.’s, so that was cool.”

Sean O’Malley has been criticized in the past for being too “soft” and not having much grappling ability. However, each time he enters the cage, he intends on proving the doubters wrong and putting on a show.

Sean O’Malley finds himself in a situation where he could potentially earn himself a title shot with one more win. It is an opportunity that not many people before him ranked outside of the top 10 have had in the UFC.

‘Suga’ arrived in the UFC with a lot of hype and expectation following his dominant display in Dana White’s Contender series. A shaky start to his time with the company quickly subsided when he went on a tear throughout the bantamweight division.

Excluding his controversial loss to Chito Vera, the 27-year-old dominated each opponent. He scored a finish in each fight up until his most recent outing against Pedro Munhoz. Although the first round was closely contested, it was clear that the prospect had begun taking over. However, the fight was cut short due to an illegal eye-poke.

O’Mally has a record of 7-1-1 and just one of those wins came against a ranked opponent in the UFC. Hence, he could very well be gifted a title shot, but must first get past the elite Petr Yan.

Check out what the bantamweight said about Khabib’s comments in the video below: