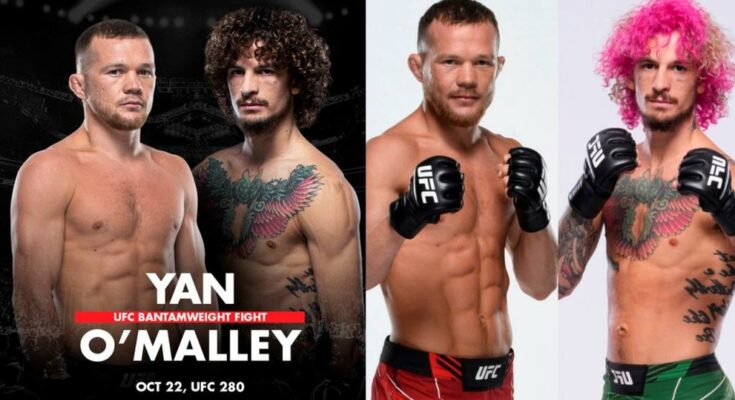 Rising star Sean O’Malley is getting a massive step up in competition in his next fight.

Sean O’Malley is taking a major step up in his next fight, announcing to ESPN’s Ryan Clark on Wednesday that he’ll be facing former bantamweight champion Petr Yan at UFC 280 on Oct. 22 in Abu Dhabi.

O’Malley (15-1 1 NC), one of the sport’s most talented prospects, fought to a no contest at UFC 276 against Pedro Munhoz as a result of a medical stoppage due to an eye poke, ultimately confirmed as a corneal abrasion. The 27-year-old fights out of Glendale, Arizona and is 7-1 with 1 NC in the UFC.

“I’m getting the fight that I wanted and the fight that the people want,” O’Malley told Clark. “In my eyes Petr is the No. 1 contender right now. He’s pretty much 1-1 against Aljo … he could be considered the champion…. Going in there and stepping up against a guy like Petr is exciting, it’s motivating and it’s the biggest fight in the bantamweight division right now.”

Yan’s manager confirmed to MMA reporter Ariel Helwani that the ex-champ verbally agreed to the fight.

“Sugar” had won three fights in a row – including knockouts of Raulian Paiva and Thomas Almeida – heading into the Munhoz matchup, which was considered his biggest test to date.

Most recently, Yan challenged Aljamain Sterling for the 135-pound title in April but came up short by split decision. That was a rematch of their controversial first meeting in which Yan lost the title by disqualification. Between the two bouts with Sterling, Yan claimed the interim belt with a unanimous decision win over Cory Sandhagen last October.

“No Mercy” held undisputed gold from July 2020 to March 2021; he finished Jose Aldo for the vacant strap.

UFC 280 will feature Charles Oliveira versus Islam Makhachev for the vacant lightweight title.