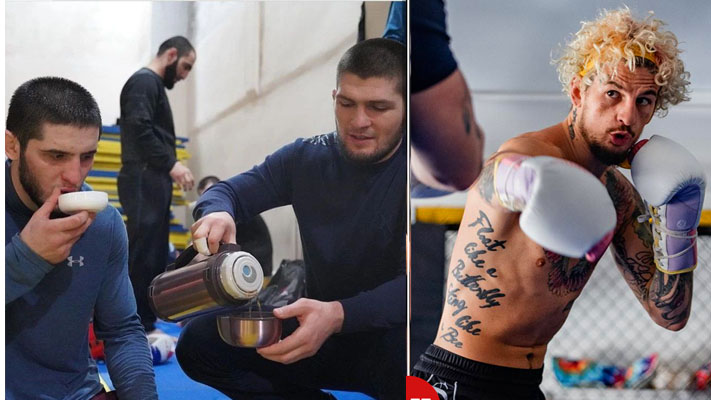 In anticipation of the upcoming lightweight title clash, Sean O’Malley is confused about the hype surrounding Islam Makhachev and admitted that he wants to see Charles Oliveira reclaim his throne in the headliner of UFC 280.

‘Suga’ will compete prior to the 155lb title fight taking center stage on October 22.

The bantamweight will be hoping to come away with another victory and push towards a shot at UFC gold, but he is tasked with taking down the formidable Petr Yan, his toughest fight inside the cage so far and a tough fight even for the best out there.

Sean O’Malley doesn’t see what all of the fuss is about when it comes to Islam Makhachev.

O’Malley admittedly hasn’t watched many of Makhachev’s fights but thinks the No. 4-ranked lightweight and future UFC title challenger is overhyped due to his relationship with former champion Khabib Nurmagomedov.

Makhachev trains under Nurmagomedov at American Kickboxing Academy (AKA) and has received a ton of hype based on several factors but mainly his similarities to Khabib.

The Dagestani native is on a ten-fight winning streak, taking down and dominating most of his opponents at will, but ‘Suga’ thinks the comparisons to Nurmagomedov are unfounded based on what he has seen from Makhachev in the Octagon so far.

O’Malley will compete on the same card as Makhachev at UFC 280 and believes underdog Charles Oliveira will defeat the latter via stoppage in the main event.

“I see Charles [Oliveira] marching out there with that high front knee doing his thing,” O’Malley, who takes on Petr Yan at UFC 280, told Helen Yee in a recent interview.

“Honestly, I haven’t watched a ton of Islam, more of a little bit of his recent stuff, but it’s crazy how hyped-up he is, literally because Khabib says how good he is. Obviously he’s went out there and performed really well in his last couple of fights too, but we’re so excited about this guy… We’re not super hyped because of all the crazy performances he’s had, it’s more so just because Khabib thinks this guy’s the best in the world. I would love to see Charles go out there and get the job done.”

Check out what Sean O’Malley had to say about the two men competing atop the 155lb mountain in the video below:

Is Sean O’Malley right about Islam Makhachev being overhyped?

Since the retirement of Khabib Nurmagomedov, Islam Makhachev has been seen by fans as ‘The Eagle’s successor, and many believe he will surpass his life-long training partner. Rumor has it that Islam used to outwrestle Khabib in the gym.

The 30-year-old arguably has a much more polished standup and slicker grappling than Nurmagomedov. He controlled all of his foes in an anaconda-like manner that was suffocating to watch. He toyed with jiu-jitsu elite Thiago Moises and outclassed ‘Master of Sport’ wrestler Arman Tsarukyan. For perspective, Petr Yan is ‘Master of Sport’ in boxing.

Not unlike his illustrious friend, Islam Makhachev has been tearing through the division without much effort, and caught the eye by easily disposing of both Dan Hooker and Bobby Green in his last two outings.

While he may not have big names on his resume, the lightweight has a chance to prove all doubters wrong by beating Charles Oliveira next month.