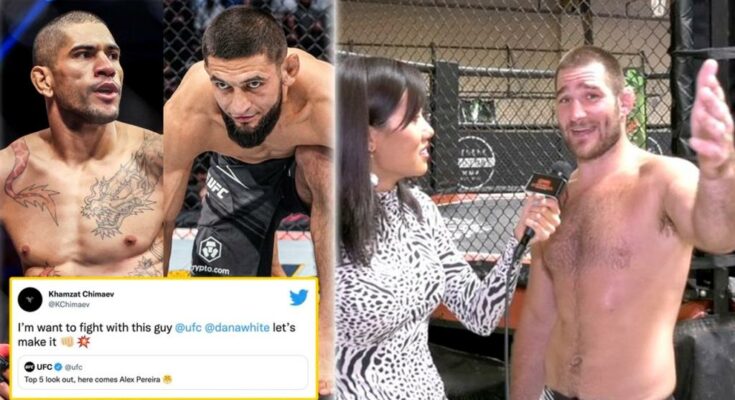 The truth is that this potential fight is not of much interest to Strickland. He’s confident that Chimaev will wrestle Pereira, who is a basic kickboxer, the whole time, and win by judicial decision.

Speaking to Helen Yee at the Xtreme Couture Gym, Strickland explained why he believes ‘Borz’ would come out on top against Pereira if they were ever to fight one another:

“I think Chimaev will pull that off. Chimaev’s not me, he’s not going to be an egotistical f***head. Chimaev’s going to do what he does and he wrestles. Me on the other hand, said ‘f*** that Brazilian, we’re going to kickbox’.”

“Should I have wrestled? Maybe. But, I think if Chimaev went in there and wrestled hard, I think he could grind out three rounds with him and take a “W”. But again, no one wants to see that s**t. It’s MMA, but it’s really kickboxing.”

Strickland was viciously knocked out by Pereira in their middleweight clash at UFC 276. Pereira has won three fights in the UFC, with two via knockout. He is also known for his 2-0 record over current middleweight champion Israel Adesanya in their kickboxing days.

Chimaev has been unbeaten since entering the octagon, with his last fight coming against Gilbert Burns in April. The Swede possesses a flawless 5-0 record in the welterweight division with eyes on a potential title clash in the near future.

Watch Sean Strickland talk about a potential Khamzat Chimaev vs. Alex Pereiraclash below: