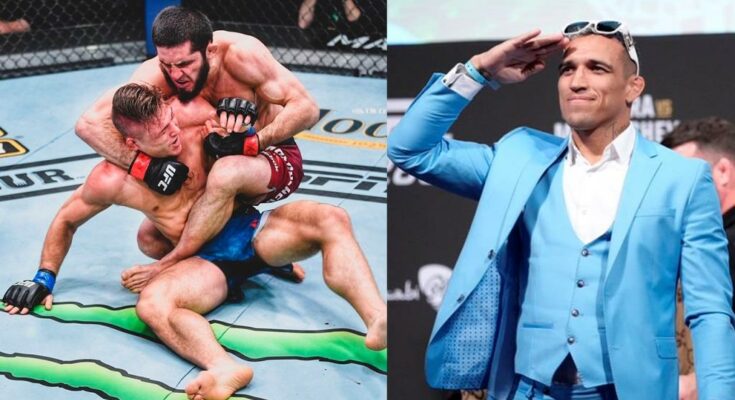 At UFC 280, Charles Oliveira will face Islam Makhachev for the lightweight title he was forced to vacate after missing weight against Justin Gaethje at UFC 274. It’s a bout that was rumored for some time but wasn’t Oliveira’s first choice.

After beating Gaethje, “Do Bronx” said Makhachev needed another win before fighting for the title, and called instead for a bout against Conor McGregor. That was obviously not to be, and with an opponent now locked in, Oliveira is putting all of his energy towards reclaiming his title.

This is one of the most highly-anticipated matchups of the year as it’ll feature a submission wizard taking on a grappling master.

When this one hits the ground, many expect that’s when the fun will truly begin.

“He’s dropping in on a wave, and that’s what he’s supposed to do,” Oliveira said of Makhachev at the UFC 280 press conference. “But if you’ve seen my record, I’ve fought tougher people, and I’m here to prove that I’ll do it again.

“I’m here to fight. That’s what I will do, and you will know who is the champ once again.”

The man they call, “do Bronx” went on to question if Islam truly wants to bring down a Brazilian jiu-jitsu ace.

“The ground is his turf so he will definitely try to do that, but if he does, will he want to do and bring down the best submitter in the history of the UFC? I’m not sure,” Oliveira said. “The name of the champion is well known, and his name is Charles Oliveira.

“We’ve seen he is the type of fellow who tries to bring the fight to the ground, but that doesn’t hinder me at all. So I’m ready for everything that he brings.”

As far as whether a win over Makhachev could sway Khabib Nurmagomedov into making a comeback, Oliveira said it doesn’t concern him at this time.

If Oliveira beats Makhachev and reclaims the title, a world of opportunity will open up for him, including the possibility of a legacy-defining fight against lightweight GOAT Khabib Nurmagomedov.

Some have suggested that if Oliveira defeats Makhachev — Nurmagomedov’s friend and anointed successor — it could be the catalyst to coax “The Eagle” out of retirement for one final bout. And while the proposition of that might be tantalizing to fans, for Oliveira it’s simply a distraction from the task at hand.

“This is a question you need to address to him,” Oliveira said when asked if Khabib may return to fight him. “He has retired, deservedly. My focus is on fighting in October, then back to Brazil to fight in January.

“We need to respect people’s opinions, decisions. Of course I respect what he has done throughout the years. If he chooses to fight me, here I am.”

The Nurmagomedov bout isn’t the only one that could lie in wait for Oliveira though. A win might set up “Do Bronx” for the lucrative Conor McGregor fight he’s been angling for.

“I don’t have a special fondness for [McGregor],” Oliveira said when asked about him. “This is business and if he brings money, great. He is a bit heavier. I could meet him there if need be. I think McGregor just wants to enjoy life. My focus is now Islam and what comes next.”

Of course, there’s another possible opponent for Oliveira as well, should he defeat Makhachev at UFC 280: Featherweight champion Alexander Volkanovski, who has been campaigning for a shot at the 155-pound belt, and even suggested they could fight for the UFC’s rumored return to Australia next year.

That doesn’t exactly mesh with what Oliveira has planned though, which is to beat Makhachev this fall, and then defend his title on home soil next year, something he has never done before.

“Baby steps. My focus now is on October and Islam,” Oliveira said. “And of course January is a bit too close to October, so I would fight as long as it’s in Brazil. I’ve been wanting to fight in Brazil for a long while. I believe that after beating Islam, I might be able to bring the fight to Brazil.”