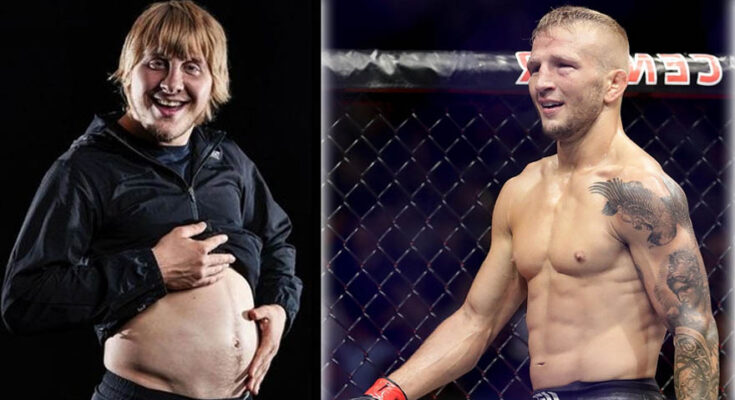 T.J. Dillashaw tested positive for EPO in the aftermath of his January 2019 defeat at the hands of Henry Cejudo. Dillashaw served a two-year suspension for it. Presently, T.J. is set to face UFC bantamweight champion Aljamain Sterling for the title at UFC 280 on October 22.

Meanwhile, Paddy Pimblett is 3-0 in the UFC and has vowed to eventually capture the UFC lightweight title.

Interestingly, Pimblett had issued a fiery response to the comments made by Dillashaw on The Schaub Show. Jibing at Dillashaw’s past PED use, Pimblett tweeted:

“Is this fella messin? TJ Dillashaw used to sell tee shirts with his fat face on it saying “fat Tyler” on when he came out of camp🤣🤣🤣🤣 don’t forget ur own past u sausage😉 Cheating little juice head wud never have won a belt without them steroids u f***ing mushroom 🤗👍🏻🤣”

Earlier this year, Dillashaw appeared on The Schaub Show and criticized Pimblett for his excessive weight gain between fights.

The former UFC bantamweight champion indicated that Pimblett lacked the work ethic and discipline to stay at a healthy weight in between fights. Dillashaw opined that unless ‘The Baddy’ rectifies this error, he’ll never be a UFC champion.

Pimblett disagreed with Dillashaw and took jibes at the latter over his PED (Performance Enhancing Drug) suspension. The Liverpudlian subsequently dared Dillashaw to say something if they were to meet in person.

Speaking to Ariel Helwani on the latest edition of The MMA Hour, T.J. Dillashaw asserted that he didn’t mean to offend Paddy Pimblett. He jestingly noted that Pimblett made witty comebacks to his criticism. But Dillashaw still stands by his views regarding Pimblett.

“When you’re coming up in the UFC, you should be able to take fights on a week’s notice. Right after I fought, a week – I mean, seven days apart I fought a fight when I was coming into the UFC because I was always in the gym, always getting better. I was ready. But if you balloon up 30-40 pounds, how can you take a fight that fast?”

“You’re obviously not in the gym. You’re out living life, and getting fat, and eating, and drinking – which, obviously, I know how these fight camps go. And you wanna let loose.”

T.J. Dillashaw acknowledged that Paddy Pimblett is already a superstar whose brand value continues to rise. Nevertheless, Dillashaw warned that Pimblett should get his weight issues under control before he faces the top fifteen UFC lightweights.

Watch Dillashaw discuss the topic at 1:48:34 in the video below: