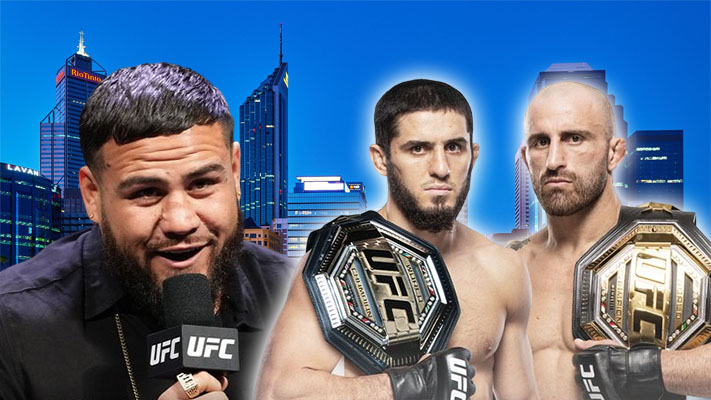 Islam Makhachev will kick off his title reign with his first defense against featherweight champion Alexander Volkanovski at UFC 284. Tai Tuivasa thinks the Russian will not have it easy in front of his opponent’s home crowd.

Alexander Volkanovski and Islam Makhachev are ranked No.1 and No.2, respectively, in the UFC men’s pound-for-pound rankings. ‘The Great’ will have the opportunity to become a double champion for the first time on his home turf in Perth, Australia.

Volkanovski’s compatriot and UFC heavyweight contender Tai Tuivasa spoke to Fox Sports Australia and offered his take on the UFC 284 main event. Tuivasa expects ‘Volk’ to showcase an improved version of himself:

“Yeah, well obviously, that’s going to be a really hard fight and I think it’s going to be a great main fight for Australia. And I think Volk is just gonna show different sides, Volk just keeps getting better. So, I don’t really know what to say about Volk. He just impresses you every time he fights. So I think that you know, with the big challenge ahead of him, he’s gonna come and he’s gonna rock up.”

Tuivasa then explained that being at home will play out well for Volkanovski and also described how he will be following the fight card:

Oliveira demanded an immediate rematch from Dana White in his post-fight octagon interview, citing that he deserved it. Reports recently emerged that ‘do Bronx’ would indeed be offered a title rematch for UFC 283 in Brazil.

However, Oliveira’s coach Diego Lima dismissed the reports in an Instagram Story. He confirmed that although a fight on the UFC 283 card was offered, it was against a different opponent and not the lightweight champion Islam Makhachev:

“Guys, the rematch was not offered to Charles as some websites are saying, this information is not true. Charles would have the opportunity to fight in Brazil, but it would not be a rematch. It would be another opponent.”