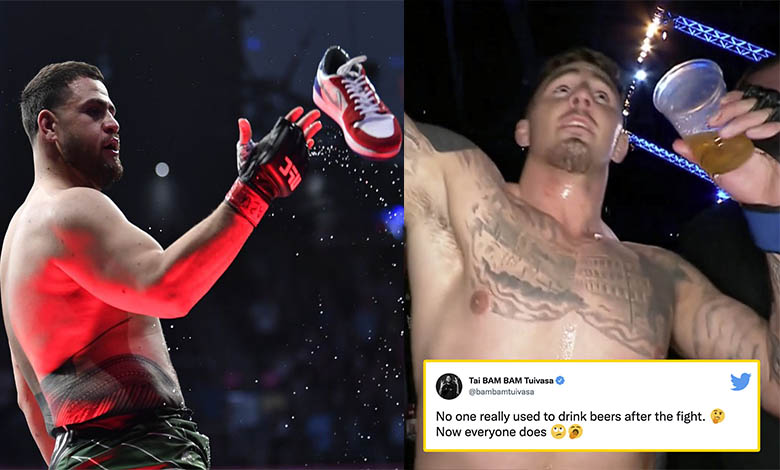 Tai Tuivasa sought credit for normalizing drinking beers post-fight after Tom Aspinall downed a couple on Saturday night. According to ‘Bam Bam’, he is the one responsible for setting the trend of drinking beers after a fight. After an elated Aspinall went back to the locker room drinking beer, Tuivasa wrote on Twitter:

“No one really used to drink beers after the fight. Now everyone does.”

Tom Aspinall took on Alexander Volkov in the main-event at UFC London. The Englishman looked dominant from the onset, scoring a takedown on his very first attempt. He then proceeded to rain vicious elbows, splitting open Volkov who eventually managed to get back to his feet.

Capitalizing on his second successful takedown, Aspinall scored a spectacular first-round submission win via a straight armlock. Currently ranked number eleven in the heavyweight division, the Englishman proceeded to call out Tuivasa after his victory over Volkov.

Tai Tuivasa explains the origins of the shoey

Tai Tuivasa is currently riding a magnificent five-fight win streak with all of his wins coming via knockout. After his most recent knockout of Derrick Lewis, Tuivasa took a steep jump of eight spots to rise to number 3 in the heavyweight rankings. The one thing that has been consistent in this run is the celebratory shoey after each win.

However, ‘Bam Bam’ wasn’t planning to make a trend out of drinking beer from a shoe. In fact, Tuivasa was focusing on getting alcohol into his system immediately after a fight. The 29-year old told ESPN MMA ahead of his UFC 271 bout against Derrick Lewis:

“Honestly, I didn’t think it was going to be anything. And it’s not like it is, it’s not like I created it or was the first ever to do it; there’s been the Mad Hueys, Dan Ricciardo … all Aussies know what it is. But it was just something that me and my mates would do on a bender. Some of the things my mates would do, you probably wouldn’t put that on television. I was just thinking what’s the fastest way to get [alcohol] into me after the fight, so I thought I’ll just start doing shoeys when I walk out. And it has stuck. It’s become my thing now.”