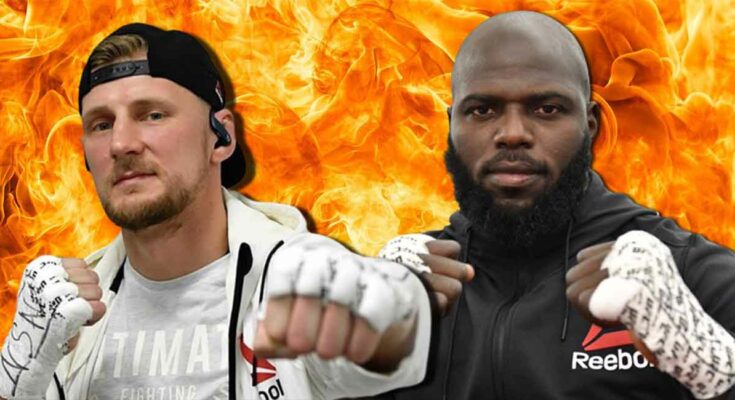 The UFC has finalized a heavyweight matchup that will headline a Fight Night in June. ESPN’s Brett Okamoto was the first to report this afternoon that the promotion had finalized a matchup between Alexander Volkov (34-10) and Jairzinho Rozenstruik (12-3).

“Alexander Volkov vs. Jairzinho Rozenstruik will headline UFC Fight Night on June 4, per UFC officials. Nos. 7 and 8 in the division, respectively. Early predictions?“

This heavyweight battle will headline a UFC Fight Night on June 4th and it will pit #7 against #8 in the rankings against each other. For Rozenstruik, he was able to get a quick fight after his last fight fell through.

Rozenstruik was scheduled to face off against Marcin Tybura at UFC 273 this past Saturday. However, after the weigh-ins, Tybura became sick and the fight was called off. It was the second time this year that the fight with Tybura had fallen through.

Instead of booking for a third time, the UFC is moving Rozenstruik in another direction. When he makes the walk on June 4th, Rozenstruik will be looking to bounce back after losing to Curtis Blaydes in his last fight.

After starting out perfect in his professional career and in the UFC, Rozenstruik is just 2-3 in his last five. Granted, the three losses have come against Blaydes, Ciryl Gane, and heavyweight champion Francis Ngannou.

Alexander Volkov (34-10) is coming off a first-round loss to surging heavyweight contender Tom Aspinall in a UFC main event last month in London. The Russian heavyweight has also alternated wins and losses in his last four appearances.

Volkov and Rozenstruik are the UFC’s No. 7- and No. 8-ranked heavyweights, respectively.