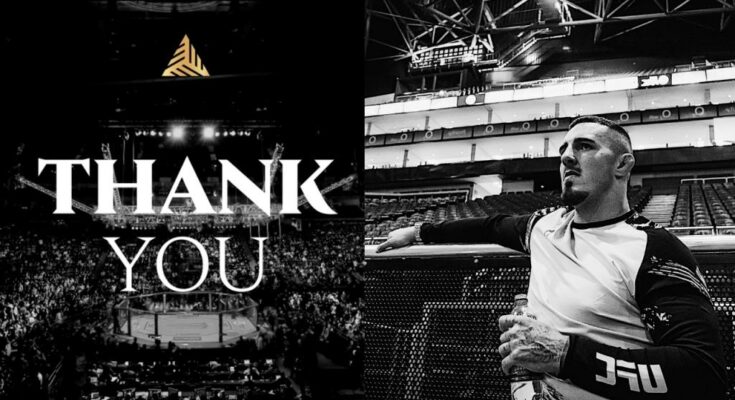 Curtis Blaydes (17-3 MMA) had entered the main event sporting a two-fight winning streak, his latest being a TKO victory over Chris Daukaus. ‘Razor’ had gone 6-1 over his past seven fights overall, with his lone loss in that time coming against Derrick Lewis.

Tom Aspinall (12-3 MMA) had entered the Octagon boasting an eight-fight winning streak, with all of those victories coming by way of stoppage. The Brit had earned a submission victory over Alexander Volkov in his most previous effort this past March.

UFC London main event did not result in the thrilling back and forth contest most fans were anticipating. Instead, the hometown fighter in Aspinall suffered a knee injury in the early stages of the opening round which left him unable to continue.

Prospective British heavyweight Tom Aspinall commented on his loss to American Curtis Blaydes. Tom also thanked his opponent, who came to the locker room to support him after the fight.

A beer makes everything feel better. What a guy, big Curtis and his team popped up to say hello. Freak accidents happen unfortunately, tonight wasn’t my night. Love u all xx

Afterwards, Tom Aspinall addressed the fans after his loss to American Curtis Blaydes. Tom thanked the fans for their support, as well as his opponent and his family.

“Last night wasn’t my night, my training camp in the build up to the fight has been brilliant. Sometimes these things happen; now is the time to recover, rebuild and come back stronger! Wanted to say a huge thank you to the UFC, the doctors and paramedics that looked after me.”

“But, also to the fans! For all the messages you’ve sent and support you’ve given me, in the build up to the fight and after the freak injury. You’re all amazing!Want to thank Curtis for being a true gentleman, it didn’t work out how we both wanted, but to come and see me after for a beer makes you a legend in my eyes.”

“Finally, my team and my family. We all know this is elite sport, we live to fight another day! Big love Tom”, – Aspinall wrote on Instagram.

Curtis Blaydes is understandably disappointed with how the UFC Fight Night 208 main event unfolded, but has no choice but to move forward.

“I have no idea what happened,” Blaydes told MMA Junkie and other reporters post-fight at UFC Fight Night 208. “He landed the kick, I went to counter, he dropped. That’s all I know.

“I’m frustrated. No one wants to win like that. I get the win, I hold my ranking. I get the money, but without a highlight, did it even happen? Did the fight even happen?”

Blaydes vs. Aspinall was a marquee matchup for the upper tier of the division. Both men are trending toward their first UFC title shot, and this result had big implications on how that would shake out.

Despite the unfortunate result, Blaydes doesn’t think his trajectory massively changes. He said pre-fight that he wants the winner of the UFC Paris main event between Ciryl Gane and Tai Tuivasa on Sept. 3, and he still think that should be how the matchmaking unfolds.

One thing Blaydes won’t do, however, is wait for a rematch with Aspinall, who has an unknown timeline to return depending on the severity of his injury.

“I’m not risking my ranking (with a rematch),” Blaydes said. “I won the fight. Heading into this fight I envisioned the winner, which is me, would be fighting the winner of Tuivasa and Gane. So I’m not going to pass up an opportunity to fight those guys when it’s right there to wait for Tom Aspinall to heal and run it back.”