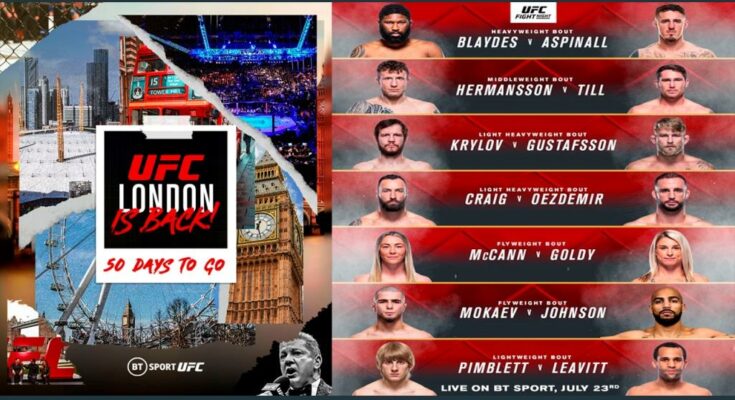 The Ultimate Fighting Championship returns to the United Kingdom on Saturday, July 23 with the UFC London 2022 fight card taking place at The O2 Arena. The main event is a five-round heavyweight battle between Curtis Blaydes and Tom Aspinall.

Curtis Blaydes (16-3, 1 NC) is riding the two-win streak. In his previous bout in March, the No. 4-ranked contender stopped Chris Daukaus in the second round. Last September he earned a unanimous decision against Jairzinho Rozenstruik.

Tom Aspinall (12-2) scored eight wins in a row. The No. 6-ranked contender was in action also in March, when he summited Alexander Volkov in Round 1. In 2021 he stopped Sergey Spivak in the first round and submitted Andrei Arlovski in Round 2.

Promising British heavyweight fighter Tom Aspinall holds his next opponent, experienced American fighter Curtis Blaydes, in extremely high regard and has labelled him the ‘toughest challenge’ in the heavyweight division.

The Mancunian believes Curtis Blaydes presents a harder match-up than the likes of heavyweight champion Francis Ngannou and MMA great Jon Jones ahead of their fight at UFC London on July 23.

“In my opinion, Curtis Blaydes is the toughest challenge in the division. So, for me to look past that, it’s basically suicide,” Aspinall told talkSPORT ahead of his second successive main event slot at London’s O2 Arena.

“I’m definitely not doing that. Without sounding arrogant or anything, I couldn’t care less about what the other people are doing.”

“When I’ve got a fight, all I’m thinking about is my opponent. I couldn’t care less about what anybody else does. For me, I think if I start thinking about other opponents. I’m just taking my eye off the challenge in front of me.”

A win over Blaydes would put Aspinall in line for a shot at the heavyweight title currently held by Ngannou, who may put it on the line against Jones later in 2022.

The 29-year-old believes anything could happen in that fight and despite his recent dominance, Aspinall believes Ngannou’s reign could come to an end with just one shot from him, Jones, or any other UFC heavyweight.

“It’s heavyweight MMA, you can’t be surprised by anything. Not even in this division, but in this sport, you can never be surprised. The heavyweights are so big, we can all beat each other,” Tom Aspinall explained.

“Ngannou is the champion right now. I know Ngannou is a devastating puncher but if someone lands clean on his chin, he’s going over just like anyone else. That’s just the nature of our division. We can all beat each other.”

Tom Aspinall is a central part of what UFC boss Dana White is calling a golden age for British MMA.

The fighter who trains at Kaobon in Liverpool is currently ranked sixth overall after defeating Alexander Volkov last time out to improve his perfect UFC record to 5-0, with five finishes.

The current UFC London: Blaydes vs Aspinall fight card looks as the following: