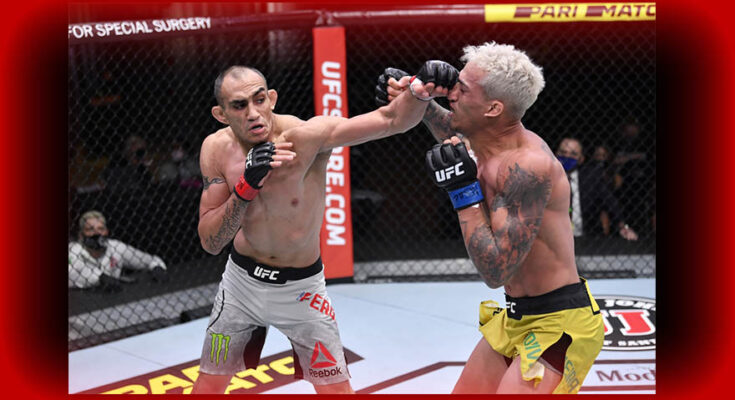 Tony Ferguson thinks he would get the better of top lightweight contender Charles Oliveira if they were to cross paths again.

Ferguson is on a four-fight losing skid that has included losses to Oliveira, Justin Gaethje, Beneil Dariush, and most recently Michael Chandler. He is in search of a new team as he looks to get back on track in his MMA career.

Ferguson fell to Oliveira via a unanimous decision at UFC 256. A win over Oliveira would’ve put him right back in the thick of things in the lightweight title picture.

Tony Ferguson and Oliveira met back at UFC 256 in December of 2020 and it was the Brazilian winning a one-sided decision. However, after the fight, Ferguson made it clear he didn’t have time to train properly for the bout as it was short notice. With that, he didn’t train grappling and now he has taken to social media to say if he has a real training camp he would beat Oliveira if they were to rematch.

“Nothing personal, but I really didn’t train anything for Charles,” Ferguson said when a fan asked if Khabib or Oliveira would be a tougher matchup. “He’s A Good kid who needed a boost. I’ll see him again. Any of them & with real training I win. Khabibi on the other hand would be a fun one the fans would like.”

Ferguson didn’t elaborate on his training conditions before the Oliveira fight, but he certainly feels he wasn’t in peak condition.

Following his recent knockout loss to Chandler at UFC 274, Ferguson sounded optimistic regarding his UFC future. His last win came against Donald Cerrone at UFC 238 back in Aug. 2019.

As for Oliveira, he’s now the top lightweight contender after defeating Gaethje at UFC 274. He was forced to vacate the title due to missing championship weight.

Tony Ferguson wants to run it back with Charles Oliveira and recently declined an offer from Oliveira to train together. Regardless of how some may feel about Ferguson’s claims, he’s certainly not lacking confidence ahead of his eventual return to the Octagon.

Although Tony Ferguson believes he would defeat Charles Oliveira in a rematch, at this point it seems unlikely the fight will happen. The Brazilian will fight for the vacant title next time out while ‘El Cucuy’ is coming off a brutal KO loss to Michael Chandler and will need some time off. After that, he will be a few wins away from getting back into contention to face Oliveira.