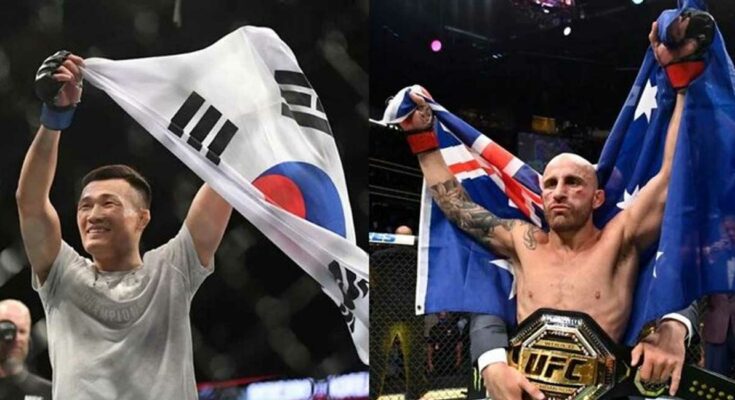 UFC 273 took place this past Saturday in Jacksonville, Florida and a few fighters were able to boost their UFC salary with performance bonuses.

Volkanovksi retained his UFC men’s featherweight championship and was rewarded with one of four UFC performance bonuses on Saturday night, earning himself an extra $50,000 along with his base pay and win bonus. Meanwhile, Khamzat Chimaev vs Gilbert Burns was an easy pick for ‘Fight of the Night’ and both fighters were awarded $50,000 in performance bonuses for their efforts.

Let’s take a look at the behind the scenes details of UFC 273, including the attendance and gate for this weekend’s UFC event, as well as the estimated fighter salaries and awarded bonuses.

UFC 273 Attendance And Gate
UFC 273 took place in front of a sold-out crowd of 14,605 at the VyStar Memorial Arena in Jacksonville.

UFC 273 Fighter Salaries
As is the case with many UFC events, the Florida State Athletic Commission does not release information relating to UFC fighter salaries. However, based on previously published payouts and the known salary structure of the UFC, we are able to make a base estimation of what each fighter was paid for this weekend’s event.

Along with the purse payouts for each fighter, the UFC is obligated to pay out on compliance for fighter participation in outfitting and media availability. This revenue is generated via the UFC’s sponsorship deal with Venum sportswear and is paid out to fighters based on how many UFC/Zuffa events they have competed in.

Khamzat Chimaev and Gilbert Burns were both awarded a $50,000 bonus for ‘Fight of the Fight.’

While two ‘Performance of the Night’ bonuses were awarded to both UFC men’s featherweight champion Alexander Volkanovski, as well as UFC heavyweight Alexey Oleynik.

The UFC also launched the ‘Fan Bonus of the Night’ at UFC 273, which is generated by a fan vote poll at the end of the UFC event. First place was awarded to Khamzat Chimaev, who took home a $30,000 bonus paid out in bitcoin. While the $20,000 and $10,000 bonuses were awarded to Alexander Volkanovski, and Petr Yan.

Based on early estimations, UFC men’s featherweight champion Alexander Volkanovski was paid out just north of one million dollars for his performance at UFC 273, this figure includes his estimated fight purse, incentive pay, and performance bonus.

UFC Staff Salaries
Below, we’ll break down some of the projected staff salaries for UFC 273.