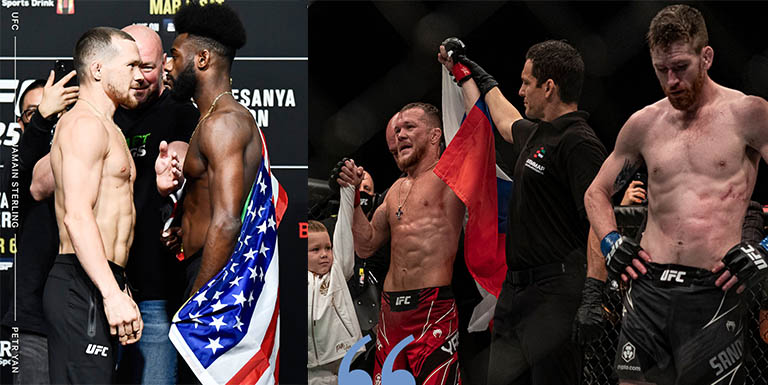 UFC bantamweight champion Sterling (20-3 MMA, 12-3 UFC) will look to unify gold with interim champ Yan (16-2 MMA, 8-1 UFC) in the co-main event of UFC 273 on April 9. The rematch, which goes down at VyStar Veterans Memorial Arena | Jacksonville, Fla., and airs on pay-per-view following prelims on ESPN and ESPN+, following their controversial title fight at UFC 259 in March 2021.

After losing his belt to Sterling via disqualification, Yan went onto to defeat Sandhagen in a Fight of the Night battle at UFC 267 to capture a piece of his title back. Since the first fight, Yan and Sterling have been trading barbs, with Yan calling himself the real champion and vowing to destroy “The Funkmaster” when they run it back.

However, Sandhagen, who suffered a quick submission loss to Sterling at UFC 250, thinks Yan would be crazy to completely underestimate Sterling.

“I think Yan is likely the more well-rounded guy, but I think if Yan goes in thinking that he’s just gonna crush him because of the way that the last fight went, I think that would be a huge mistake on Yan’s part, but I don’t think he’s that poor of a competitor.

“I think that he’s gonna go in and do really well again and not let the last fight impact him, and I think Yan is just kind of a better all-around competitor also than Sterling is. But that being said, Sterling’s a very good fighter. He’s a very good competitor and he’s a good grappler so there’s always that.”

Having competed against both Yan and Sterling, Sandhagen thinks Sterling is the one that needs to change his approach more so than Yan, who was starting to take over the fight before he struck Sterling with the fight-ending illegal knee late in Round 4.

“If I was him (Sterling), I would definitely change the pace that I was fighting,” Cory Sandhagen said.

“It was a little bit chaotic, but it also threw Yan off a lot too so that was a positive that came from that, but you saw in the later rounds that was definitely not going to be something that would have benefitted him in Rounds 4 and 5. If I was Sterling, I would definitely change the pace of the fight.

“I would not try and make it as frantic as he kind of made it in the first one and then if I was Yan, I would probably do the exact same thing that he did in the first one because if Aljamain slows down the pace, that just means that Yan gets to fight at a less chaotic pace which I think Yan does really well in so yeah they both definitely have some corrections to make.”