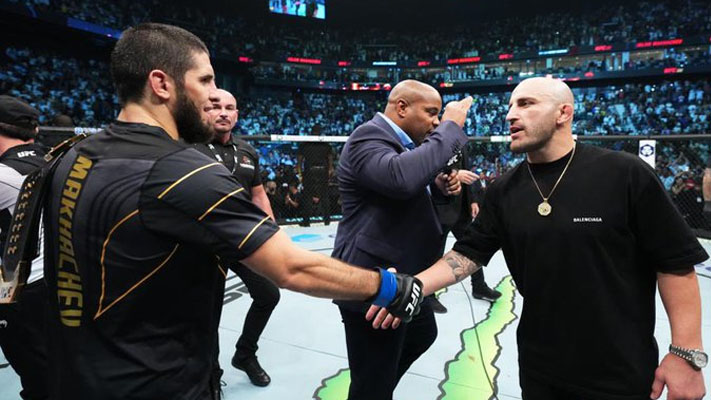 Islam Makhachev is gearing up to face Alexander Volkanovski at UFC 284 and the Dagestan native has issued a warning to his upcoming opponent.

Volkanovski and Makhachev are set to fight for the lightweight title in a super fight on February 12 in Perth, Australia.

The fight will also be a rare occasion when the fighters holding the top two spots in the pound-for-pound (P4P) rankings will compete against each other.

The lightweight champion recently gave an update on his preparations to face ‘The Great.’ Posting on Twitter, the Dagestan native stated:

“Fight camp is on. Be ready short guy.”

Following his championship win against Charles Oliveira at UFC 280, Makhachev made it clear that he wants to fight the P4P king. In his post-fight interview, Makhachev referred to Volkanovski as a “short guy” before the featherweight champion walked into the octagon for a face-off.

Islam Makhachev had one loss in his UFC career back in 2015, and since then has remained undefeated, becoming the lightweight king at UFC 280 after a second-round submission win against Charles Oliveira.

Alexander Volkanovski is undefeated in his UFC career and the featherweight champion last beat Max Holloway via unanimous decision in his fourth title defense at UFC 276.

Alexander Volkanovski feels that Islam Makhachev is underestimating him ahead of their clash at UFC 284 in Perth, Australia. The Australian looked noticeably smaller than his Dagestani counterpart when the two faced off in the octagon.

However, Makhachev’s aforementioned “small guy” comments have led Volkanovski to believe that the lightweight champion thinks little of his abilities. As far as ‘The Great’ is concerned, Makhachev’s confidence could backfire on him.

During an October interview with Submission Radio, Volkanovski said:

“It’s funny, I feel like he’s underestimating me in a sense where I’m just a featherweight, a small featherweight. How am I gonna be able to handle his strength?… That’s how he’s looking at it. Which is gonna be a shock when we face off.”

“When he tries to grab a hold of me, realizes, ‘Oh sh*t! This man isn’t as weak as I thought,’ struggles to get me down, or even when he does get me down and I start getting back up… Mentally, he’s breaking. This stuff is going to get to him because that’s not what he’s expecting.”